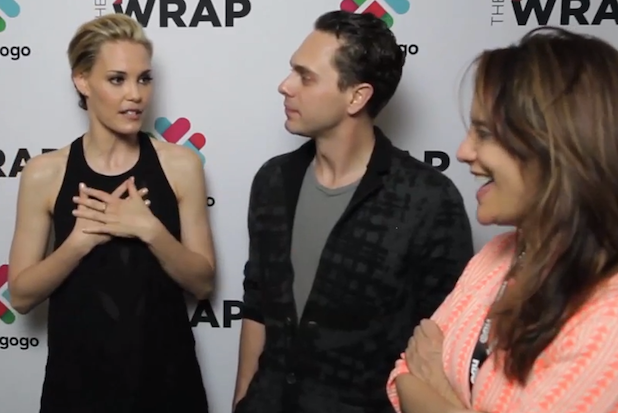 The music is loud, the barbecue is juicy and the cabs are nowhere to be found. These are the facts of South by Southwest, where thousands of entrepreneurs, filmmakers and journalists roam the streets of Austin looking for a good time.

Those same people also come to Austin looking for the next big thing — whether it’s a filmmaker named Lena Dunham or some start-up named Twitter.

TheWrap and Indiegogo crammed filmmakers, actors, writers and executives into a studio across from the Austin Convention Center in pursuit of both. In the process, we learned Robert Duvall is a foodie, Mark Duplass thinks I’m an idiot and Spandau Ballet will play their first North American show in more than two decades.

Here’s what you missed at South by Southwest in 2014:

1. Someone Made a “100-Minute Selfie of Elijah Wood“
Ellen DeGeneres’ Oscar selfie transformed James Franco’s favorite tool into a cultural touchstone, and the reverberations are being felt. A member of the audience at the  “Neighbors” premiere asked the cast to take a group selfie with him. Seth Rogen shut him down immediately, recognizing an uninspired copycat.

So is there a way to get innovative with the selfie? You betcha.

“‘Open Windows’ is a 100-minute selfie of Elijah Wood,” director Nacho Viagalondo told TheWrap. “You have to see it.”

2. Robert Duvall Needs Your Money
Duvall was the most accomplished and respected actor who came to our studio. That statement will offend none of the actors, writers or directors who stopped by, as Duvall appeared in several Oscar-nominated movies before many of them were old enough to drink. Yet Marlon Brando’s former consiglieri has landed in an unenviable position familiar to so many aspiring filmmakers — he needs money. Duvall wants to make a movie about Texas Rangers, a family drama that he will make at a ranch in West Texas.

“To raise $5 million for a little low-budget film is very difficult and I’m trying to do something now,” Duvall told TheWrap. “You know I’ve got a few more left before they wipe the drool.”

Duvall is going to cast his wife Luciana as a female Texas Ranger, but he needs some other castmembers, too.

“I have to find a young name to find leverage financially, and it’s very difficult to get hold of young actors,” he said. “A lot of them never even get back to you, some of them where bred kind of rude these days.”

Here’s our interview with Duvall:
3. Leslie Bibb Is Writing Her Own Movie
Bibb traveled to Austin for the premiere of “Take Care,” a movie she stars in that Liz Tuccillo wrote and directed. It is the feature debut for Tuccillo, who wrote for “Sex and the City” and co-penned the self-help book “He’s Just Not That Into You,” later adapted into a movie.

The experience rubbed off on Bibb, who revealed to TheWrap she has been working on a screenplay. So far she’s only shown it to a few people to get feedback, and she shared a few details with us.

“It’s called ‘Get Happy,'” Bibb told TheWrap. “We’re out and we’re starting to package and hopefully get this actor. He’s reading right now and he is interested and I hope that he does it. Bibb, a former model, has appeared in movies, shows and plays — but now she wants to make other people spout the lines.

“It’s about a relationship, but I’m not going to say anything more because I think it’s really sort of a genius idea,” Bibb said.

4. Juliette Lewis Is Going Back on the Road — Will She Bring a 20-Something Guy With Her?
In “Kelly & Cal,” Lewis plays a middle-aged woman suffering from a mixture of post-partum depression and Peter Pan syndrome. Bored and isolated, she befriends a high school senior, dropping by with her newborn to drink beer and play guitar. Her character was in a rock band when she was younger.

The same could be said of Lewis, who first came to South by Southwest as a musician. Though she’s been working on music for the past three years, the public has heard very little, and that’s about to change. Lewis is going to release a new EP in the next couple of months, one she worked on with musicians from rock band Cage the Elephant. She’s also headed out on tour, opening for the band during a few dates on the West Coast.

“We worked in Nashville, and it was really exciting to be together,” Lewis told TheWrap. “I’m going to open for them in April, Cage the Elephant, just some west coast shows to get my feet wet then I am going to back out there.

Will she bring Jonny Weston, her co-star, with her?

“They can’t even stand in a room without something happening,” director Jen McGowan said.

5. “The Faults in Our Stars” Is Bigger Than “Spiderman” – at Least on Tumblr
“The Fault In Our Stars” is going to be a big fat hit if Tumblr fan pages signify anything. Fans of the upcoming movie, based on Jonathan Green’s best-selling novel, are already making all kinds of GIFs with photos and quotes from the books.

“‘Fault in Our Stars’ has so many quotable lines inside that book, it’s overwhelming,” Tumblr’s entertainment evangelist David Hayes told TheWrap. “The fans have really done a great job basically chopping that book up into micropieces of content and sharing it with one another.”

Fox will release the movie later this year, by which point it will have gotten a big boost from “Divergent,” a hit waiting to happen. Both movies star Shailene Woodley, the indie darling who will soon anchor two big studio movies.

“‘The Fault in Our Stars’ is a juggernaut,'” Hayes told TheWrap. “When that movies come out we might break Tumblr.”

6. Shaq Is Making a Video Game
The four-time NBA champion has given himself a lot of nicknames — the Big Aristotle chief among them — and the TV analyst wants to resurrect one as quickly as possible – Shaq Fu, his ass-kicking alter ego. O’Neal conceived the persona two decades ago for a video game reviled by most, which he has dubbed  it a “cult classic.” Now he’s making a sequel, and this time he promises quality.

“Beat em up, kick ass, you want me to show you one of the moves?”

7. Everyone Wants to Be the Next Lena Dunham
If you watch a movie that premiered at South by Southwest, chances are it will portray Brooklyn hipsters. “Fort Tilden,” which won the top jury prize, portrayed a couple of girls venturing into “deep Brooklyn.” Then there’s “Wild Canaries,” a murder mystery set in New York’s largest burrough.

There’s little doubt that Dunham, whose “Tiny Furniture” premiered at the festival in 2010, inspired all these young filmmakers adorned in plaid. In just a few years since she first appeared on the scene, she has a hit TV show and is plastered on the cover of national magazines – some photoshopped aggressively, some less so.

Just to be clear: there’s nothing wrong with people wanting to follow Dunham’s path, but it’s a hard act to follow.

8. Doubles Tennis Is the New Boxing
You know what’s even less compelling than a movie about tennis? A movie about doubles tennis. Besides a pair of siblings — Venus and Serena Williams and Bob and Mike Bryan — the public ignores doubles players.

Hollywood has been making boxing movies for decades, and it continues to do so despite the sport’s flagging popularity. Tennis, another sport that has moved from the mainstream to the niche, has never been a popular subject. The ball moves too swiftly. The play is not fun to film. The characters, John McEnroe excluded, have never been as compelling. So when it comes to doubles tennis, Hollywood might not even know what it means.

“Break Point” should change that. A funny and heartwarming tale, it features several tennis scenes — albeit at a lesser level. It uses the format of doubles tennis to its advantage, featuring many exchanges between the two brothers — played by Jeremy Sisto and Alex Walton — whose relationship serves as the movie’s rocky foundation.

9. Ron Perlman Will Never Work for Fox Again
Those who watch “Sons of Anarchy” know Ron Perlman as Clay Morrow, the tenacious, ethically compromised biker who once led a branch of the eponymous gang. Yet creator Kurt Sutter killed off Morrow last season, and it seems Perlman is unhappy about it. Or he’s got a wicked sense of humor.

“I was in the middle of production, “Perlman said, explaining how he made “Before I Disappear.” “Luckily if anybody has seen season 6 of ‘Sons of Anarchy,’ which is the worst season of the show’s history, for a variety of reasons that I won’t get into because I don’t want to plug that show, I had a lot of free time. I had one of those sub stories, like a sub basement kind of deal.

“I think I just broke out into a sweat,” he later added. “I think my career is over. I’ll definitely never work for Fox again.”

10. There Are Going to Be a Lot More Movies Like “Her”
Spike Jonze’s tale of a man who falls in love with his operating system won an Oscar for Best Screenplay. A lot of other filmmakers have similar plans. Several movies at the festival play with the idea of technology’s affect on human behavior and relationships between friends, loved ones and complete strangers.

“Open Windows,” the aforementioned 100-minute selfie, comments on how a lack of physical interaction allows for morally ambiguous decision making. “The Internet is playing tricks with our morals all the time,” Vigalondo, the movie’s director, said. “Frank,” about a musician who hides behind a mask, toys with the notion of celebrity in the connected age.

And then there’s  “The Heart Machine,” which chronicles a couple whose relationship blooms during video chats and other long-distance communication. Yet Cody (John Gallagher Jr.) believes his girlfriend, played by Kate Lyn Sheil, is lying about being thousands of miles away. He thinks she’s in New York, too.

“That strange paradox of connecting people but also making it tougher to really create a strong sense of intimacy was interesting to me.”