Symone Sanders, who served as press secretary for Bernie Sanders’ 2016 campaign, and later in Vice President Kamala Harris’ press shop, will soon have her own show on MSNBC. The timing and format of the weekend program is yet unknown, according to the New York Times, but it will air Saturdays and Sundays starting in the spring. She will also appear on MSNBC’s streamer, The Choice (on Peacock), and act as a fill-in anchor on the network.

“I’m a young woman, a young Black woman from the Midwest,” Sanders told the New York Times. “Yes, I do politics, but I’m also a consumer of pop culture. I watch the news, I check Twitter, but I’m also into ‘Real Housewives.’ I’m interested in reaching what I call the nonpolitical group chats, the discussions that are penetrating outside of Washington.” 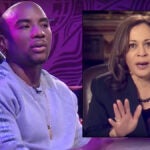 Also Read:
Kamala Harris Gets Testy With Charlamagne Tha God When She’s Asked Who ‘the Real President’ Is (Video)

According to MSNBC, Sanders will also contribute written work to MSNBC Digital.

In December, reports of Sanders’ intention to leave the White House in the new year surfaced. In addition to being Harris’ chief spokesperson, she was also the vice president’s senior adviser.

After working on President Joe Biden’s successful 2020 election campaign, she was tapped to join the all-female press team as he moved into the White House.

In her political career, she’s made a name for herself through cable news appearances. After famously being told to “shut up” by a Republican official on-air, she turned the viral moment into the title of her memoir: “No, You Shut Up: Speaking Truth to Power and Reclaiming America.”