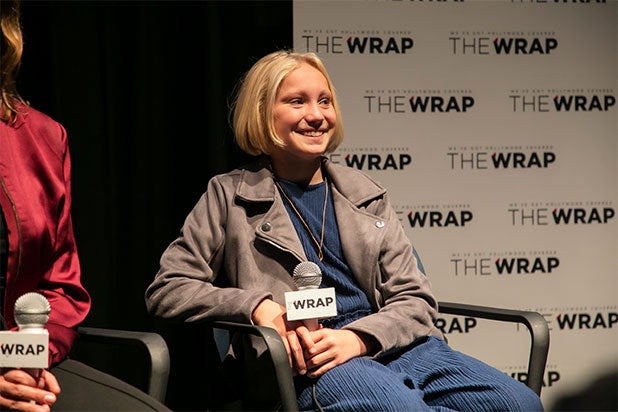 “System Crasher” star Helena Zengel was only nine years old when cast as wild and energetic Benni in Nora Fingscheidt’s film. And the young actress said the script, especially the heavy use of swear words, drew her to the difficult role.

“First of all, I normally can’t do those things, like say those words, so yeah, that was one reason. The other reason was I had very nice people around me,” Zengel told TheWrap at the Landmark screening of the film. “I was happy [Nora] trusted me that I can do this role and I liked the script very much. I read it every day with my mom and we talked about, okay, ‘do you think you can be you after that again?’ And we decided, yes.”

You’d think it’d be difficult for Fingscheidt to find her leading lady for a role that would be extremely daunting and exhausting for anyone, especially a nine-year-old. And she was worried that once she found her actress, her parents would never let her do it. But Zengel was the seventh girl that auditioned, and every other young actress that came after her couldn’t compare.

“I was writing the script, [it] took me five years to write this. I was doing a lot of research and then writing, research, writing. And during those five years, I thought, I’m never gonna find a girl who can play that role,” Fingscheidt explained. “If I find the girl, probably the parents will never allow it. So I was pretty pessimistic. And I asked our producer to please start one year before shooting and they were saying, ‘Nora, that doesn’t make any sense because children change — the kid you’re going to cast now is going to change until you start shooting.’ We did a first round of casting and Helena was girl number seven. It was immediately clear. First of all, she’s extremely talented, but also she enjoyed to, as she said, behave badly… And still, after meeting her, I cast 150 more girls, because I thought, it cannot be that easy. But that became ridiculous because I compared every kid to Helena in my head because she has this great ability to play the aggression, always with a layer of vulnerability.”

But Zengel did change in one aspect: “When you really watch the movie, because we didn’t shoot it chronologically, you will notice that she sometimes has a tooth, sometimes she doesn’t, sometimes it’s half-grown, but in the end, it doesn’t matter.

“System Crasher” is Germany’s foreign-language entry at the 2019 Academy Awards and follows Benni (Zengel), who gets shuttled from one care home to another due to her outbursts of violence and rage. But all she wants is unconditional love. Albrecht Schuch, Gabriela Maria Schmeide and Lisa Hagmeister also star.

“Since I started filmmaking, I always wanted to make a film about a wild, little girl. Because I mean… when I was a kid — today we would probably put the diagnosis ADHD — I was hyperactive, and I remember how it feels when you get on the nerves of adults all the time. But I never had the story for it. I tried to write some scripts but they felt meaningless. So I put it aside, and I didn’t think about it. And then some years later, I did a documentary about a shelter home for homeless women in Stuttgart. And someday, and it was a very sad place, a very depressing state institution for homeless people, like 70 women of all ages and one day, a 14 year old girl moved in this institution. I was shocked. I thought, what is a teenager doing in this kind of place? And the social worker said, ‘Oh, it’s the system crashers, we can always take them in on their 14th birthday, because no institution in the whole country dares to take them in anymore.’ And I thought, there it is!’ Like it hit me from behind. And I thought I now I had the story and the title all at once, because I have never heard that term before.”

Also Read: 'Windows on the World' Star Edward James Olmos on Playing a 9/11 Survivor Without US Citizenship

The character of Benni required a lot of rage and screaming, but Zengel, who is now 11, didn’t feel like there was one scene that was especially challenging, because to her, it was “instinct.” She did tell the audience, however, that the crew had to take a two-week break once because she got sick from the weather conditions they filmed in. Fingscheidt added that Zengel lost her voice during the scene in which Benni is locked in a closet, because the shot of that particular scene was extremely logistical.

“What was also hard was that the other kids didn’t really understand that you were an actress, like in the beginning when you have 20 kids bullying Benny, when the cameras stopped rolling they would continue to bully her,” Fingscheidt explained. “That’s when you got really mad. Those kids were not professional actors, most of the kids in those scenes are kids that we found in schools. So for them, it was really hard to understand the difference.”

Fingscheidt and Zengel began to prepare for the film six months before shooting began: “Sometimes we would just go shopping in thrift stores, selecting clothes for her and then make lists, how Benni would react and how Helena would react to really emphasize the difference between the two — I never wanted her to confuse between those two personalities.”

And Zengel’s acting chops rubbed off on her costars.

“The other actors learned from her. She’s playing the most intense scene kind of, you know, screaming or being tied up, and then it’s like, ‘five minutes break!’ And she’s like, running down the hallway. Albrecht, who plays Micha, is a method actor who wants to stay in character at all times, but after a few weeks he started to relax during the breaks, and after the shooting, I met him for dinner, and he said, ‘you know what I learned from that shooting? I don’t need to stay in character during the break.'”

A small German indie has now led to Zengel just having wrapped Paul Greengrass’ “News of the World,” alongside Tom Hanks, and Fingscheidt is now making a Netflix movie with Sandra Bullock.