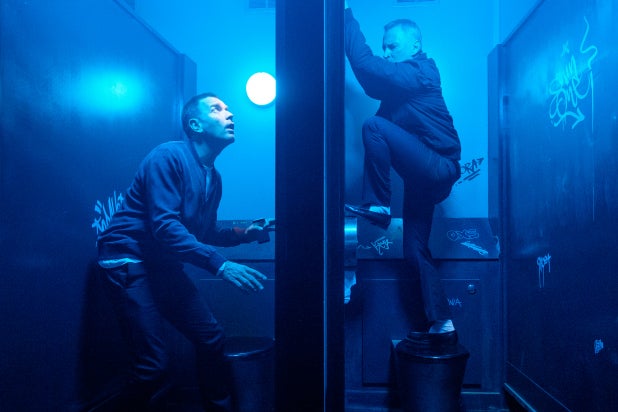 How do you follow a cult success that defined the zeitgeist for a generation of film lovers, music fans and (recreational) drug users?

Such is the legacy of Danny Boyle’s “Trainspotting,” and such was the pressure of expectation that getting the “band” back together has taken 20 years. But at last it’s here and, as a nervous-looking Boyle himself admitted introducing the very first screening in London’s Leicester Square on Jan. 19, all the returning actors would look at him while shooting it last summer as if to say: “This had better not be sh—, Danny.”

So, to assuage the fears of many — Boyle included — “T2 Trainspotting” (opening Jan. 27 in the U.K., March 17 in the USA) isn’t sh—. How, the original film’s bitterly ironic yet uplifting mantra “Choose Life” has now mutated into a rather less inspirational “Choose Disappointment.”

The lead character Mark Renton, played once again by a boyish-looking Ewan McGregor, utters these words during a litany of what he considers the modern world’s ills, many of which include social media (nothing dates a movie as awfully as words like “Snapchat” and “Twitter”), and you can’t help viscerally feeling that very disappointment, which is the film’s dominant theme. Here are four characters who were losers when we left them in 1996 and who haven’t made any strides forward.

Renton is now falling off a treadmill in a gym in Amsterdam. Begbie (Robert Carlyle) remains in an Edinburgh prison, Simon “Sickboy” Williamson (Jonny Lee Miller) has graduated to blackmailing local dignitaries with the help of pretty Bulgarian sex worker Veronika (impressive newcomer Anjela Nedyalkova), and “Spud” Murphy (Ewen Bremner) is still a junkie, his life ruined by not being able to cope with clocks going forward an hour in summertime: “How was I supposed to know it was summer? I was still wearing a jumper …”

See Video: James Corden Gets Ewan McGregor to Admit He Pooped His Pants in the '90s

Boyle’s film, meanwhile, is addicted to its own nostalgia, or as one character calls it, “being a tourist in your own youth.” For Renton, it’s about going home; for Begbie, it’s about rnge; for Sickboy, it’s about being stuck in your aunt’s old pub in a city hooked on ’80s nostalgia nights while European subsidies and waves of gentrification obliterate the past. (To say nothing of the fact that the tourist board’s girl-in-a-kilt at the airport saying, “Welcome to Edinburgh” is really from Slovenia.)

There are, of course, some bravura Boyle moments, such as when Sickboy’s apartment turns into a football stadium, or Spud’s cold turkey finds Bremner (the best performer of the lot) silhouetted like Nosferatu on the peeling wall of his squalid council flat. Or when Renton finds himself re-enacting his iconic dash through the Edinburgh streets, only to end up splayed across yet another car.

Time has not diminished the director’s love for a variety of shots and angles: Boyle simply can’t resist forcing his now-regular cinematographer Anthony Dod Mantle into ry corner of the set, shooting high and low, distorting the lens, a Dutch tilt here, a Scottish wobble there.

It’s as if Boyle hasn’t got quite enough confidence in the script or the performers; his energy as a director sometimes hampers his vision as an artist. And while the first film somehow captured, defined and shaped the mid-90s zeitgeist of Brit-pop and dance culture, of New Labour and a new wave of British cinema, you can’t help feel that “T2 Trainspotting” misses any such opportunity, particularly as it was shooting during the Brexit vote and now appears on the of Donald Trump marching into the White House. Unless you perceive the zeitgeist now being all about disappointment, which, all things considered, it may well be.

Maybe these junkies are still too carried away with their own stories and addictions to care about the wider world, but while that attitude once made for a cockily self-assured youth rebellion movie, it feels self-obsessed and sad now. And, yes, watching middle-aged men snort coke in dirty toilets is as unattractive as it sounds.

“T2 Trainspotting” isn’t a bad film at all. In places, it’s terrific, but it too often drags in a pool of its own despondency, a miserable and melancholy movie that almost looks a bit embarrassed to be so. As for the soundtrack, which produced two must-have albums 20 years ago, it can’t match its predecessors, although there is clr mash-up work at play, with teasing refrains and chords of Lou Reed and Underworld floating throughout, alongside blasts of Blondie, remixes of Queen’s “Radio Gaga” and new material from Wolf Alice.

It feels trite to observe that “T2 Trainspotting” is a more mature film than its junior self. Of course it is, but the problem is it doesn’t feel wiser, just wearier. But maybe then again, don’t we all?

Jake Gyllenhaal starred as a teenager dealing with bizarre visions of a menacing figure in a rabbit mask named Frank in writer-director Richard Kelly's 2001 film.

It's been 15 years since the movie opened in theaters and is now considered something of a cult classic. With the help of the film's trivia page on IMDb, TheWrap has amassed six of the most mind-bending facts about the movie...