Taika Waititi may be headed to a galaxy far, far away — or at least, a different galaxy than the Marvel one we’ve seen him in so far — but that doesn’t mean he remembers everything about “Star Wars.” In fact, he totally forgot that his “Thor: Love and Thunder” co-star Natalie Portman was in the prequels — and accidentally told her so.

Granted, because it’s Taika Waititi, he could be fully joking. Even the reporter speaking to him questioned if that actually happened. But Waititi maintained it did, nodding and adding with a laugh “I forgot about those ones!” 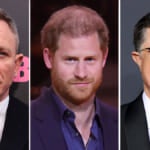 So, how did Portman respond when he said it? Well, it was about as awkward as you’d expect.

On May 4, 2020, Lucasfilm announced that Waititi would co-write and direct a new, theatrically released “Star Wars” film. Earlier this month, when TheWrap sat down with him to talk about “Thor: Love and Thunder,” we asked about the status of the project and how it’s coming along, considering some had suggested that filming on Waititi’s movie would begin later this year.

But, the director was quick to debunk that timeline.

“Not this year,” Waititi said when we asked if he’d begin working on the project soon. “I’m going to be in New Zealand from August until the end of the year with ‘Our Flag Means Death’ and ‘Time Bandits’ and during that time I will still be writing. I’m still trying to figure out what the story is.”