The project marks L.A.-based Humanoids’ first foray into film production, the company said in a statement. It is also the first time that “The Incal,” the top-selling science fiction graphic novel in history, has been adapted. Along with directing, Waititi is writing the screenplay with Jemaine Clement and Peter Warren.

Humanoids is producer with Primer Entertainment, a company led by David Jourdan that acquired a stake in Humanoids in 2019 and brought in a multimillion dollar development fund for a slate of projects. Humanoids plans to announce additional partnerships for the film’s distribution at a later date.

“The films and graphic novels of Alejandro Jodorowsky have influenced me and so many others for so long,” Waititi said in a statement. “I was stunned to be given the opportunity to bring his iconic characters to life and I am grateful to Alejandro, Fabrice (Humanoids CEO Fabrice Giger) and everyone at Humanoids for trusting me to do so.”

Jodorosky was equally enthusiastic about having Waititi at the helm in expanding the “Jodoverse.” When Giger “introduced me to Taika Waititi’s work, it became obvious to me that he was the one,” Waititi said in the statement from his home in Paris. “I fully trust Taika’s ceativity to give ‘The Incal’ a summing take, intimate but at the same time of cosmic proportions.”

Created in the late 1970s by by filmmaker/writer Alejandro Jodorowsky, now 92, and French artist Moebius (1938-2012), is according to the statement an “epic space opera” about private investigator John Difool, who happens upon a mystical and powerfui artifact known as the Incal, that is coveted by various factions across the galaxy. The unlikely hero embarks on an improbable mission to save the universe which slowly becomes a spiritual journey “examining the duality and meaning of existence.”

Said Humanoids’ Giger: “It began as the adventures of a jackass named John John Difool, and then it became something else — we called it THE INCAL — something that has transformed everything it’s ever touched and continues to do so: its creators, theother artsits who later became part of John’s journey, its publisher HUMANOIDS and myself in the process, countless readers, writers and directors, and soon, I believe, the great Taika Waititi himself and everyone who looks to him for inspiration.” 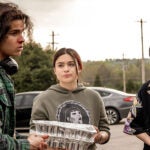 Taika Waititi, also occasionally known as Taika Cohen, is from the Raukokore region of the East Coast of New Zealand. His father is Maori and his mother is of Ashkenazi Jewish, Irish, Scottish and English descent. He directed “Thor Ragnarok (2017) and “JoJo Rabbit” (2019). He co-created FX’s “Reservation Dogs” with Native American filmmaker Sterlin Harjo, whom he met through the Sundance Institute.

Waititi is represented by CAA and Manage-ment.

Jodorosky and Waititi talk about the process of adaptation in the video below: