Taika Waititi was on hand to present at the Critics Choice Awards on Sunday night, but before he did, he made one thing clear: New Zealand doesn’t really want to welcome any American transplants at this point.

As the “Thor: Love and Thunder” director and co-star ramped up to reading the nominees for Best Director, he noted that there was quite a bit of international talent, joking that there were “even” nominees from the United States. Jokes aside, Waititi did make sure to call out the countries being represented — including his own.

But, in doing so, he also tossed out a PSA on behalf of New Zealand. 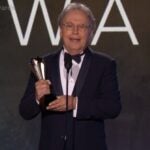 Waititi’s remarks are not the first time he’s poked fun at an awards show category lineup. Last year, he did it to the Grammys, making fun of, well, himself.

Last March, Waititi won the Grammy for Best Compilation Soundtrack Album for Visual Media, for “Jojo Rabbit.” Even he was a bit baffled by the news, tweeting “Lol wtfffff.” Then, during his acceptance speech, he joked, “I guess they’re giving Grammys to anyone now.”

That win actually put Waititi halfway to EGOT status, as he previously won an Oscar for Best Adapted Screenplay, also for “Jojo Rabbit.” He very nearly won an Emmy in 2020, as he was up for Outstanding Character Voice-Over Performance for “The Mandalorian,” as well as Outstanding Comedy Series for “What We Do in the Shadows.”