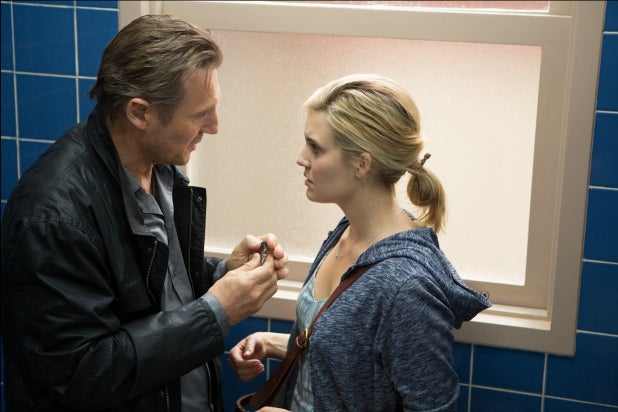 If we’ve learned anything from the “Fast and Furious” movies, it’s that it’s perfectly OK for sequels to get stupider so long as they also get more entertaining and more meticulously crafted.

There’s plenty of stupid on display in “Taken 3,” but otherwise this dispiriting action movie – somehow simultaneously fidgety and flaccid – exists only to give Liam Neeson one more chance to play the role that made him “Liam Neesons,” unlikely autumn-years action star. After seeing Neeson’s Bryan Mills lay waste to sex traffickers and the Albanian mafia in the two previous installments, the filmmakers apparently felt hard-pressed to find a bad guy who could present a viable challenge to the seasoned CIA veteran.

Returning screenwriters Luc Besson and Robert Mark Kamen and director Olivier Mégaton didn’t even bother, instead pitting Mills against a gaggle of Russian mobsters so garishly stereotypical that they resemble the “Opulence, I has it” guy from those old DirecTV commercials. Those cardboard cut-out villains are just one of the script’s many problems, which also include dialogue so unwieldy that Neeson wrestles with it like a wad of chewing gum that still has the wrapper attached, as well as a third-act twist so predictable and obvious that you keep waiting for the real twist to happen.

This time around, Mills’ life seems relatively calm, while it’s his ex Lenore (Famke Janssen) who’s got problems, namely that her second marriage to Stuart (Dougray Scott) seems to be collapsing. She drops by Bryan’s place to cry on his shoulder and to make a pass (which Bryan gallantly deflects), only to have Stuart pop over later to ask Bryan to stay away from Lenore while they work on their marital issues.

The next day, Lenore winds up in Bryan’s bed with her throat cut, and the cops arrive just in time to assume that Bryan is the culprit. He handily escapes the LAPD – who are, with the exception of Dotzler (Forest Whitaker), presented as Keystone Kops – and sets out to find the real killer while also protecting daughter Kim (Maggie Grace) from becoming the next victim.

The idiocy and predictability of the plotting could be forgiven had “Taken 3” delivered the superior action sequences that audiences would expect, but Mégaton and editors Audrey Simonaud and Nicolas Trembasiewicz take every fist-fight, shoot-out and highway chase and shred them into milliseconds of mismatched visual information like something out of a latter-day Godard movie. (At some point, I wrote down “a series of random concepts” on my notepad and stopped trying to make any narrative sense out of these scenes.)

Neeson, who has brought his A-game to movies as silly as “Non-Stop” and “Unknown,” can’t seem to be bothered anymore; his smiley, sympathetic banter with Janssen represents some of his least convincing screen work, “Battleship” included. Whitaker snaps rubber bands and plays with chess pieces (he’s the most tic-prone police inspector since Herbert Lom in the “Pink Panther” movies), Grace pouts and frets, Scott twitches and glowers, and “Taken 3” begins to feel like a cranked-out direct-to-DVD dud that somehow made its way to the big screen. It’s such an incompetent production that the film opens with what may be the cinema’s first unintentionally funny establishing shots (they’re swoopy and set to exaggerated doom music by Nathaniel Méchaly) and goes downhill from there.

Audiences the world over made Neeson an action star when they fell in love with his “particular set of skills” in the first “Taken,” but this third go-round finds both cast and crew opting not to exercise any of them. Everyone involved seems to be determined to quash anyone’s interest in a fourth chapter.