One of the minor surprises of the Oscar nominations was the Best Original Score recognition for Marco Beltrami and Buck Sanders, who collaborated on the music for “The Hurt Locker.” Not only does the Academy have strict rules that make it difficult for collaborations to be recognized, but Beltrami’s and Sanders’ work – a spare, moody soundscape that’s integrated into the film’s remarkable sound design – is certainly not a traditional orchestral score in the vein of fellow nominees like James Horner’s “Avatar” and Michael Giacchino’s “Up.”

Beltrami, who was nominated for his 2007 score to “3:10 to Yuma,” studied under Jerry Goldsmith and has been writing film music since 1994; Sanders has been working with Beltrami for more than a decade, moving from his assistant to a full-fledged co-composer.

(Photo of Sanders, left, and Beltrami by Austin Hargrave) 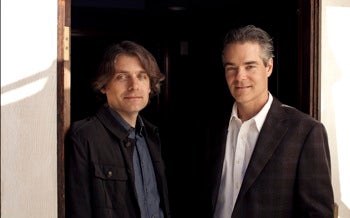 How did you come to work as collaborators?
BELTRAMI: I met Buck in 1997, and little-by-little we saw that he had strengths that I didn’t have. So he became more and more involved creatively on projects as well.

SANDERS: Marco has a formal education in composing classical concert music, and he became interested in film music later on. So his strengths lie in that, and in arranging for orchestra. Where I would say that my strengths are more in creating a sonic palette that goes outside the orchestra.

BELTRAMI: Or manipulating acoustical sounds that can be used in the sound palette of a particular film.

The sound palette you talk about is absolutely crucial to “The Hurt Locker,” and the music often plays a very subtle role in that palette.
SANDERS: Yes. Kathryn [Bigelow] was very cautious about that. Anytime she sensed that the music was getting a little too much, she’d say, “Let’s try this instead.”

BELTRAMI: In that respect, this is a very untraditional score. It’s not a score where you have musical ideas that are developed harmonically and thematically through the movie. We do have thematic ideas that are developed, but most of the score has to do with taking sounds that already existed from the sound department, or creating our own sounds, and using those to help create a score. It was a much different objective.

Not to say that it was easier – in fact, much to the contrary. I think a lot of what we did on this was, in a way, more difficult. Because the object was to be seamless and yet manipulative at the same time.

How did you become involved with the project?
BELTRAMI: Kathryn was in the editing process, and she had a little bit of my score to “3:10 to Yuma” temped into part of it. I think the reason it worked is because Sgt. James, when he’s there in a bomb suit in the deserted city in Iraq, he’s almost like that solitary figure walking down the street in a ghost town in the Wild West. So I think that’s why it was used as temp music.

So she thought that maybe we’d be interested in seeing it – and as soon as we saw it, even in that rough state, we knew it was an extremely powerful piece of work.

SANDERS: At first Kathryn didn’t even envision much music, or any music at all, but I think as she was editing she wanted to go beyond sound effects to bring a little emotionality to it. 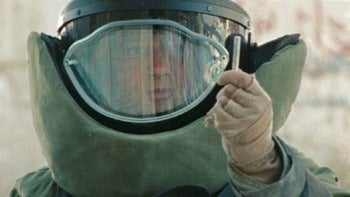 What were the main challenges?
BELTRAMI: There were two. One was, how can we go between sound effects and music and have them seamlessly work together? And the other was, what’s going to work for Sgt. James and the team that isn’t too over the head? It had to be recognizable, but not call too much attention to itself.

SANDERS: One of the great things was that Kathryn gave us an open palette. There weren’t any specific guidelines, it was just “the world is open, go ahead and experiment.” It was a very enjoyable, creative process for us.

She has said that one of her goals was to put the audience in the shoes of the guys on the bomb squad, and to keep them a little disoriented. Was that something you tried to do with the music?
SANDERS: Absolutely, that was one of our objectives. To heighten that disorientation, to capture the distorted reality that the soldiers were in and amplify it.

You also use touches of Middle Eastern music, or at least music that sounds Middle Eastern.
BELTRAMI: It’s not necessarily a film about Iraq, so we didnt’ feel any pressure to accurately represent Iraqi music. The film is about the addiction to war, and the adrenaline of that. And it’s set in this foreign landscape. So we took instruments, but not even necessarily Middle Eastern instruments. We had Chinese instruments, and a Greek multi-instrumentalist come in and create these bizarre sounds that could be interpreted as Middle Eastern. But it was all to reinforce the alien landscape they were in.

How did your collaboration work?
SANDERS: We only have one computer, so we trade off, tag-team a bit. We’ll watch the film together, and one of us will say, “I have an idea, let’s try it with this scene.” It develops like that, and goes back-and-forth like ping-pong.

BELTRAMI: Every scene was a real collaboration. Someone would have an idea and run with it, and then the other would go back to it. There have been scores that we’ve done where one of us will do something and the other will do something else, but this was really ensemble work.

Are you surprised by the reaction to the film, and by how well it’s done in awards season?
SANDERS: The reaction hasn’t surprised me. I was confident that people would realize what an amazing film she made, and the fact that people do feels right.

BELTRAMI: But I think we both were surprised when the score got nominated, because a good portion of it is not music as you traditionally know it in a film score. I was very pleased, and Buck was pleased, that the Academy recognized the musical work that was involved.