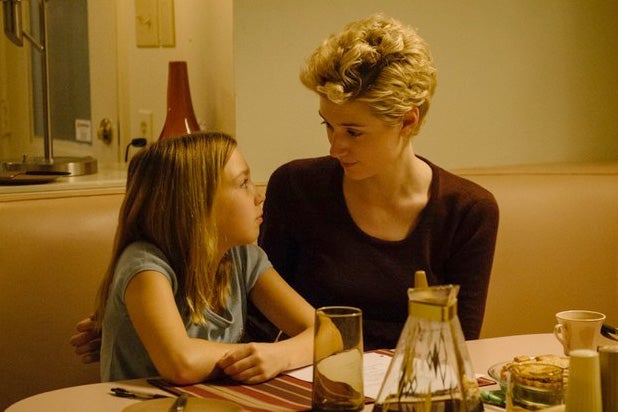 As a director shooting the HBO movie “The Tale” based on her own experiences as the survivor of childhood sexual abuse, Jennifer Fox faced a special challenge: how to handle the crucial and horrific sex scene between 13-year-old Jennifer (Isabelle Nélisse) and her grown-up track coach (Jason Ritter).

“That scene is so broken apart, we shot-listed it, and we prepared days before of where the cameras would be, that it didn’t have this great emotional meaning for me that people would expect,” Fox told TheWrap.

And Fox and her production team got creative in how they set up the scene to protect Nélisse, who was 11, turning 12, at the time the film shot on location in Louisiana in 2015.

Also Read: Laura Dern: 'We All Felt Wrenched' by Sexual Abuse Story of HBO's 'The Tale'

“Isabelle was on a vertical bed, and there was never any physical contact between her and Jason,” Fox told TheWrap. “Jason wasn’t even allowed to put his arm around her, according to Louisiana law. Everything Jason did [physically] was done with a 22-year-old body double — even the dialogue, which was pretty graphic, wasn’t said to Isabelle directly.”

Instead, Fox explained, she would read cues to Nélisse, like “act like a beast is on you,” “act like your grandma is chasing you” or “act like you are eating something sour” to get the facial reactions from Nélisse used in the film.

“We rehearsed a menu of cues that we ran through several times,” Fox added. “The camera was on a long lens and Jason was always four feet away from Isabelle. Her hair was hair-sprayed out to look like she was laying down. Her mother, her dog and a psychologist were on set to make her feel safe, and everything was said on headphones so anything said on set was monitored. Then we had to get it signed off by Louisiana.”

Dern, who plays an adult version of Fox in “The Tale,” said she initially had some trepidation about the film’s sex scene because it was so “horrific.”

“My agent and I, we wanted to be talked through how you put a child through this and how she could be protected,” Dern told TheWrap. “Jason came to set early to spend time on location and really talked through everything, and all of that swayed my greatest worries… It was meticulously handled, and so much protection was given.”

Fox never wavered from her plan to depict the worst of her childhood trauma on screen. “It was basically a deal-breaker not to put those physical scenes in there, and I wouldn’t have made the film without them,” she said.

“It was important to not blur the ordinary horror of child sexual abuse,” she added. “This is not pleasure, it’s pain for a child to please an adult. Every time it happened to me, I threw up. It was also very difficult for Jason. He was horrified.” (A spokesperson for Ritter did not respond to TheWrap’s request for comment.)

It helped that her cast departed from her own experiences in significant ways. “Jason looks nothing like the real person, Isabelle looks nothing like me, so there was this visual disconnect,” Fox said. “It was an afterthought, actually — once I understood that Laura’s soul fit the character, the fact that she was blonde was a tool for separation. It wasn’t originally in the plan.”

Dern had her doubts about whether Fox was too close to the material. “I have to say, with the scene itself, I always wondered if she could want to or be able to shoot it herself,” the actress said. “We had conversations early on where I was confronting it with her, asking her, ‘What if [filming the sex scene] is too hard? What if we’re in the middle of it and it’s too much for you, for your own healing?'”

At one point, Dern said, producer Owen Moverman even offered to find another person to step in and shoot just that scene — but Fox insisted on handling it herself. “I don’t know how she did it, but she did,” Dern said. “She did everything she set out to do.”

While “The Tale” was filmed before the #MeToo movement picked up steam, Fox and her cast said that film has gained relevance with the flood of harassment and abuse accusations against powerful men like digraced mogul Harvey Weinstein.

“When we started to produce this script, which was five years ago, I mean we were way out on a limb,” Fox said in January at the Sundance Film Festival, where the film had its world premiere. “Now with the #MeToo movement, we are so blessed to be coming out at a moment when people can actually take this story and begin to grapple with the truth about child sexual abuse.”