In 2006, Sian Heder, a writer for “Orange Is The New Black,” wrote and directed the short film, “Mother,” about a woman who hires a stranger to babysit her toddler. Ten years later, Heder has taken that premise and expanded it into her first feature, “Tallulah” — premiering theatrically and on Netflix — a gap-filled maternal character study that offers terrific performances to smooth over those cracks.

The most troubled of the story’s mothers, a drunken mess named Carolyn (Tammy Blanchard), is hiding out from her unhappy marriage in a luxury hotel. Living only for male validation, she’s disinterested in parenting, barely tending to her toddler. And when Carolyn mistakes the homeless, room-service-tray-scrounging Tallulah (Ellen Page) for hotel babysitting staff, she leaves the child in this stranger’s care. Tallulah promptly steals Carolyn’s cash, yet just as quickly begins mommying the baby.

Heder has already established Page’s character as a commitment-phobic free spirit, a woman content to travel and live in a van, one who impolitely invites her boyfriend Nico (Evan Jonigkeit) to leave when he expresses the first desire for stopping in one place and settling down as a couple. As such, it’s understandably a little confusing when “Lu” simply begins parenting a baby to whom she has no connection, walking out of the hotel room with the child in her arms, and impulsively turning herself into a substitute mother and actual kidnapper. 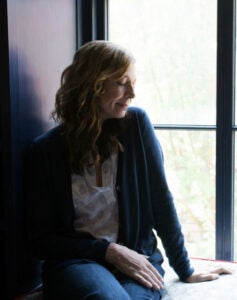 Lu hunts down Nico’s estranged mother Margo (Allison Janney), a well-to-do Manhattan author, separated from her gay professor husband (John Benjamin Hickey). Safely in the comfortable apartment, she passes herself off as the mother of Margo’s grandchild for a few days of room and board. And because this is a narrative of convenience, where dysfunctions and solutions perfectly align themselves among random strangers, Margo accepts the story and begins bonding with Lu. All Lu has to do is keep up the ruse, and keep Margo away from TV and newspaper headlines related to the crime being committed.

Though the audience later learns the sole crucial detail of Lu’s backstory, the catalyst for her thoughtless decision-making skills, the rest of her character — at least as written — remains an inexplicable blank. This is also true for the script’s attention to Margo and Carolyn. A bad experience unravels a life, and personalities are meant to be extrapolated from that jumping-off point.

The formal blandness of Heder’s competent direction — interrupted by ill-advised digressions into dreams where characters float in midair in defiance of gravity, or jump into the ocean to swim away from trouble, scenes that exist as blunt symbols and not much more — interrupts what rhythm the film achieves. Too timid to embrace the full, natural, drabness of everyday existence, yet also too fixated on isolated moments of stylistic flourish, the result is a confused jumble of impulse control, as though Lu herself were in the director’s chair.

What saves “Tallulah” from American indie sameness and its allegiance to neat resolution are its three lead actors and Heder’s apparent skill in bringing out their best work. Page’s Lu is wounded and reactive, confused about how to survive, driven by damage she doesn’t want to explore, and fully in control of her own adolescent presentation, knowing that it elicits sympathy on sight.

Janney, in turn, conveys an appropriate and intense level of righteous fury as a woman trapped in both privilege and unwinnable domestic unhappiness by her husband’s career and his hidden sexual orientation, all the while understanding that she chooses to remain there and spin her wheels.

But it’s Blanchard, given the least to do and doing the most with it, who reveals complex layers of conflicted maternal impulses and selfishness. If this were “Bad Moms,” she’d be a goofy joke about liberation, but since “Tallulah” aspires to live somewhere in reality, she’s a heartbreak every moment she’s on screen. Together, the three women construct lived-in characters, succeeding where less talented actors would fail, in a story that wants to hear them but isn’t always sure how to present what they have to say.

Heder has delivered a flawed, promising first film, one with its heart, if not always its head, in the right place. She also seems, then, to be something of an actor’s director, and for now, that’s just about enough.