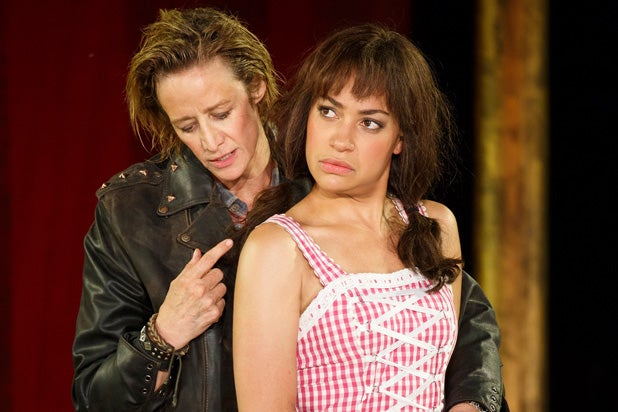 Meryl Streep should be the last person to steal the show from Phyllida Lloyd. The director, after all, gave Streep her biggest commercial hit, “Mamma Mia!” and her third Oscar win, for “The Iron Lady.” Regardless, Streep’s dead-on impersonation of Donald Trump at the Public Theater’s June 6 gala went viral just one week before Lloyd’s all-female, Trump-bashing “The Taming of the Shrew” opened Monday at Central Park’s outdoor Delacorte Theater.

Streep delivered a devastatingly funny blowhard, completely with orange makeup, bleach-blond pompadour and beefy bodysuit. The many actresses in male drag in Lloyd’s “Shrew,” on the other hand, appear dwarfed in their two-piece suits and fedoras, all of which look several sizes too big.

Judy Gold, playing Gremio, offers up a Trump Lite character halfway through the show. She’s mildly amusing. Actually, the best moments of this “Shrew” are when Lloyd dumps Shakespeare and riffs on the presumptive Republican nominee for president.

She has fashioned this battle-of-the-sexes comedy around a contemporary beauty contest in Padua, Italy, hosted and produced by a man who uses the words “huge” and “amazing” a lot.

Gayle Rankin turns Bianca into a Southern beauty queen, with Cush Jumbo playing the also-ran sister Kate, who’s tired of being upstaged. Rankin charms in a legally blonde sort of way. Jumbo proves that she’s no more adept at comedy than drama, having made a dull Broadway debut two seasons ago in “The River.” At least she does convince us she’s female, although a very loud and coarse one – and not in the ways the shrew needs to be played.

But back to the women in drag. Streep scored as Trump because she took his macho affectations and made them even bigger than life. No small feat.

Because men are physically larger than women, it’s easy to get laughs when they wear dresses, jewelry, feather boas, and much make-up. When women do drag, there aren’t any of those flamboyant accessories and the clothes are boring.

Worse, what you get is a lot of small men on stage. It’s just not very funny, and Lloyd doesn’t push the machismo enough to be parody, unlike Streep.

Janet McTeer delivers an adequate Petrochio, the man who turns Kate from shrew to lady. McTeer takes all those over-the-top male traits and tries to make a character out of them: She leers, belches, wags her tongue, scratches a lot. Later, she vomits beer and pees on stage, her back discreetly turned to the audience. After her Petrocchio rapes Kate on their wedding night, I fully expected her to emerge from the trainer dangling a big dildo between her legs. Alas, Lloyd doesn’t go there. It’s Central Park, after all. How much better it would be to have a man in the role, someone like Christian Borle, who gave us this same rock-star performance in his recent run in “Something Rotten”?

With women impersonating men, Lloyd means to say that while the play has the word “shrew” in the title it’s populated with a bunch of total pricks. The men are the ones who’ve made Kate bad. This take is interesting for about five minutes. In performance, it turns dull fast.

"Hamilton" Greets James Corden To kick off the show, the cast of "Hamilton" parodies its own opening number to introduce James Corden as the Tony host. "It needs a trouble-maker, a mover and a shaker. It needs that chubby dude from 'Into the Woods' who played the Baker." Classic!
View In Gallery
BIO Robert Hofler
Robert Hofler, TheWrap's lead theater critic, has worked as an editor at Life, Us Weekly and Variety. His books include "The Man Who Invented Rock Hudson," "Party Animals," and "Sexplosion: From Andy Warhol to A Clockwork Orange, How a Generation of Pop Rebels Broke All the Taboos." His latest book, "Money, Murder, and Dominick Dunne," is now in paperback.