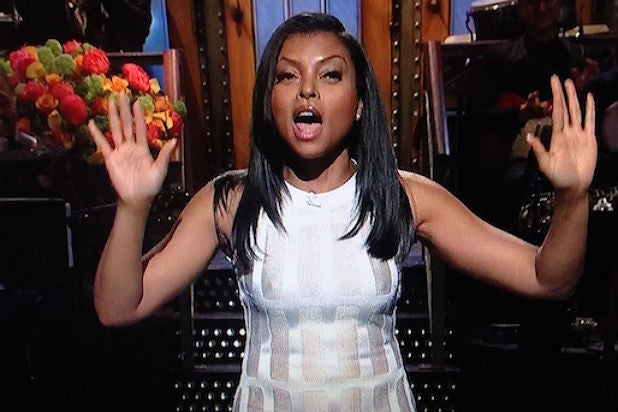 Taraji P. Henson is not a comedienne, but the Oscar-nominated actress is hilariously over-the-top as Cookie Lyon in Fox’s top-rated, soapy drama “Empire. Sketch comedy is a hard beast to tame and Henson proved this when she set out to conquer the art form as a first-time host on “Saturday Night Live” this weekend.

In her opening monologue, she strutted and sang with a choir about achieving long overdue mainstream acclaim in a song called “I Made It.”

“This is so nice,” Henson deadpanned before the song. “After 20 years in show business, white people finally know who I am.”

In some of the night’s other sketches, Henson went on to play a lawyer in an HLN sketch, a QVC host in another bit and Nicki Minaj in a parody of “Home.”

A “Boyz N the Hood” inspired parody titled “John Singleton‘s Game of Thrones” short turned out to be rather funny with well-timed cameo from “GoT’s” Nikolaj Coster-Waldau aka Jaime Lannister and not because of Henson.

To no one’s surprise, “Empire” made its way onto the show and Henson once again proved how funny she is as Cookie Lyon this time on a “Sesame Street” short that included an Elmo coat.

Henson also garnered giggles as Janelle’s freak dancing mom on the recurring web show sketch “How To Dance with Janelle” and as a black woman who wanted to play baseball in a bit that intelligently parodied “A League of Their Own.”

If “SNL” had reversed the order of the sketches and showed the “Sesame Street,” “Janelle” and baseball pieces first, the episode would’ve been much stronger. Instead, the writers probably disappointed a lot of “Empire” and Henson fans early on.

In other segments, “Weekend Update” was a treat with Michael Che delivering a few brilliantly crafted one-liners on police shootings and college riots and a delightful cameo by Billy Crystal as Jacob the Bar Mitzvah Boy’s dad.

Meanwhile, Kate McKinnon‘s “SNL” domination continued as she nailed it in both the cold open as Hillary Clinton and as Jane Lynch on “Hollywood Game Night.” The added bonus was seeing Darrell Hammond as former President Bill Clinton again.