After months of fielding questions about the future of their company and Quentin Tarantino’s controversial “Inglourious Basterds,” Bob and Harvey Weinstein got the last laugh.

That’s because "Basterds" surpassed all projections to take in $37.6 million this weekend, according to Hollywood.com and studio estimates.

The Nazi drama-comedy was tracking around $25 million on Thursday — the same total earned by Tarantino’s previous best debut ‘Kill Bill Vol. 2” — but a $14.5 million Friday paved the way for the writer-director’s largest opening by far.

"This is a film that wowed audiences the way that only Quentin Tarantino can,” the Weinsteins said in a statement. “We look forward to a great run in the U.S. and continued success around the world." 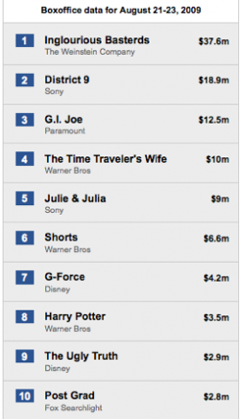 "We always knew that the film would be much better received critically than some people seemed to think it would be out of Cannes," said Tom Ortenberg, the Weinstein’s head of theatrical marketing. "It reminded me a lot of ‘Crash,’ which played the Toronto Film Festival to what appeared to mixed reviews, and when it was released a few months later it– was one of the best reviewed movie of year."

‘Basterds’ got strong support on Rottentomatoes.com, and had an A- on Cinemascore exit polling, Ortenberg said.

For the Weinsteins, the numbers shoud bring a huge sigh of relief. Almost since the launch of the Weinstein Company, Harvey and Bob have been forced to deal with questions about its viability.

They founded it after leaving Miramax in 2005, where Tarantino’s “Pulp Fiction” ushered in a decade-long stretch of both Oscar gold and high grosses. Their success with movies such as “Shakespeare in Love” and “Chicago” left a sizeable impression on the industry.

However, since the Weinsteins’ opened up their new shop, their endeavors have been less fruitful.

In addition to sinking money into various other projects, such as social networking site ASmallWorld and cable channel Ovation TV, they have also been less profitable with the moviemaking side of their business.

Though they have had moderate successes like “Scary Movie 4,” most pictures have gone the way of “Fanboys,” which grossed less than $1 million worldwide earlier this year.

Despite news that they hired financial adviser Miller Buckfire in June and reports of their taking out a sizeable loan, the brothers have remained quiet about their finances and refused to go on the record with any publications entering this weekend.

With Tarantino at the helm, its budget of $70 million and Brad Pitt in the leading role, many labeled "Basterds" a make-or-break movie.

Though one big weekend may not erase all doubts, questions should now shift to the movie’s staying power as not only did it set a record for Tarantino domestically, but it also shattered many of his previous bests internationally.

“Basterds” grossed an estimated $27.5 million at 2,630 locations in 22 territories, establishing new highs for the director in 18 of them. It will open in 42 additional territories over the next three months.

Tarantino and Pitt have both had sustained success overseas and Tarantino’s three biggest hits — the “Kill Bill” movies and “Pulp Fiction” — all equaled or bettered their domestic grosses internationally.

This result is particularly satisfying for Universal, which handled the international distribution and is splitting the worldwide take down the middle with the Weinsteins. The studio’s previous summer releases had struggled, particularly other R-rated fare such as “Bruno” and “Funny People.”

Both of those movies have managed to hold audiences despite the steady inflow of competition. Sony’s “District 9,” the sci-fi thriller directed by Neill Blomkamp and produced by Peter Jackson, dropped 49 percent to $18.9 million, giving it a total gross of $73.5 million.

“For a sci-fi movie normally you would expect it to drop in the mid-50s upwards of 60 percent in its second week and then it kind of mellows out,” said Rory Bruer Sony’s head of worldwide distribution. “Certainly with ‘Inglourious’ going right at our core audience, you would expect to hit the high end of that drop.”

With a glut of movies at the top targeting a similar audience, alternative programming continued to do well as both Warner Bros’ “The Time Traveler’s Wife” and Sony’s “Julie & Julia” saw sub-50 percent declines.

“Time Traveler,” starring Eric Bana and Rachel McAdams, took in another $10 million, bringing its total to $37.5 after a 46 percent drop. “Julie & Julia” came in fifth with $9 million, dropping just 25 percent for a gross of $59.3 million thus far.

Meanwhile, Tarantino’s good friend (and fellow Weinstein disciple) Robert Rodriguez had a movie of his own this weekend, but family-friendly "Shorts," which opened in more than 3,000 theaters, sputtered. The film, with Jon Cryer, Leslie Mann and William H. Macy, was produced in association with Imagenation, the Abu Dhabi company that launched in 2008.

As most studios decided against competing with "Basterds," no other new movies cracked the top five, but elsewhere in the top ten Fox Searchlight’s comedy “Post Grad” took tenth with $2.8 million.