By 2012, global spend on artificial intelligence is anticipated to hit $57.6 billion, according to International Data Corporation (IDC). And one YouTube star — Taryn Southern — is already activating AI to pioneer a new methodology for producing music. Released today, Southern’s pop album “I Am AI” features eight tracks, each produced entirely with artificial intelligence. She’s also released a new music video “Welcome to the New World,” which integrated collaborators from all over the world.

Southern’s first single Break Free reached #48 on the Billboard Indicator Chart , #2 on the Euro Indie Chart and has more than 1.8 million views on the music video. Life Support, her second single, was nominated for a 2018 Streamy Award for Best Immersive Video.

Her  work on “I AM AI” is unprecedented. Until now, producing an album entirely with artificial intelligence had never been done. And, it’s a process Southern said will revolutionize the open-market for aspiring artists and musicians and disrupt an age-old model for the music industry.

“I definitely see it changing the future of the music. I imagine in 20 years, ‘coding’ songs will be commonplace,” Southern told VideoInk (a subsidiary of TheWrap) exclusively in an interview. “It’s still incredibly early for AI, but I could see artists using machine learning for all kinds of applications: to mix and master their songs, to help them identify unique chord progressions, alter instrumentation to change style, determine more interesting melody structures based on a musician’s given sound and style preferences, even gage their audience’s emotional response to a song. The sky is the limit.”

So, how does producing music with artificial intelligence work exactly?

Southern collaborated with Amper — an artificial intelligence music composition software — to develop a process that she says involved telling the computer the sounds, notes, or instruments she wanted. Amper’s software then delivered a “stem,” or audio fragment, to match that criteria. Then with feedback and multiple tweaks, Southern is able to stitch those “stems” together to create a track.

“This is what the future holds. For us it’s all about the collaboration between creator and the AI,” said Michael Hobe, a Hollywood film composer and co-founder of Amper. “That’s what we’re working towards — to have AI truly integrated into the workflow. And Taryn was really the first to use the tools in this way, which has been really exciting.”

For Southern, taking the reins on charting a career path in unconventional ways has been her M.O. She was early to YouTube, launching a channel based on slap-stick and musical comedy in 2006. “I’m not really focused on building an audience on another platform until I have at least 250,000 subscribers on YouTube,” she told VideoInk in 2013. She now has nearly 500K subscribers on YouTube, a platform where Southern isn’t as active outside of releasing music videos for “I AM AI”.

“When I was on YouTube, I felt owned by an algorithm,” Southern said. “It’s a really tough job to sustain, and we’ve seen a lot of creators experience burnout the past few years. I didn’t want to become a living breathing vlog machine, so I threw in the towel and started exploring other avenues of interest.” 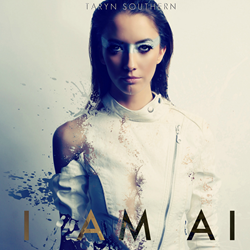 Aside from the album, Southern is also directing a feature-length documentary on the future of man and machine. “It’s called I AM HUMAN. My album is ironically entitled I AM AI, so I’ve got both sides covered!” Southern joked.

And so Southern has reinvented herself as a technology innovator and AI-storyteller. A musician changing the game, Southern’s work on “I AM AI” is breaking down the old-way of making music and alchemizing the future into the present.

“I AM AI” is now available on Spotify, iTunes, Google Play and Apple Music.

Jocelyn Johnson is the Director of Digital Video News and Membership at TheWrap, Jocelyn draws upon nearly 10 years as a serial entrepreneur of both services and venture-backed businesses in the entertainment industry, including VideoInk, which was acquired by TheWrap in August 2018.
x
Looks like you're enjoying reading