Kim “Toshi” Davidson, a veteran member of Taylor Swift’s touring dance team, has apologized after posting memes that made light of sexism and sexual assault on Instagram.

“I would like to offer my sincerest apologies for the insensitivity of my social media posts,” Davidson said on his Instagram on Saturday. “While they are not a reflection of my views, they are offensive and in bad taste. I deeply regret my action, and I’m heartbroken that I hurt my fans and followers who have encouraged me and have always believed in me.”

The apology comes weeks after Davidson upset many fans for sharing the memes, including one that stylized the phrase “back to the kitchen” in the “Back to the Future” font. Davidson followed up with a chilling meme of “every girls [sic] weakness” that included pictures of a rag, a bottle of chloroform, a black van, and a secluded forest. 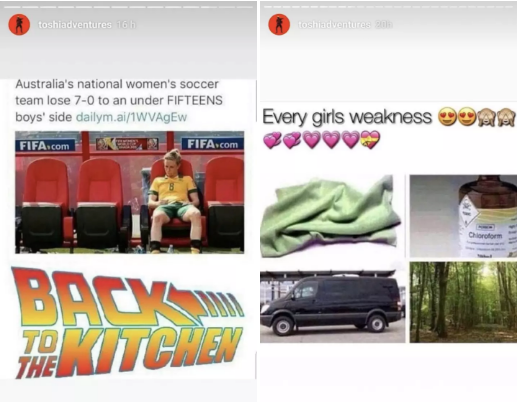 Davidson’s mea culpa comes after he had initially pushed back against his livid fans. “If you can’t take a joke, this isn’t the page for you,” said Davidson in a May Instagram Story captured by BuzzFeed.

The dancer has been performing with Swift since 2014, but was missing in action from her performance in Chicago on June 1. Davidson has also been wiped from the Reputation tour’s program, and his name doesn’t appear on the end credits of her live show.