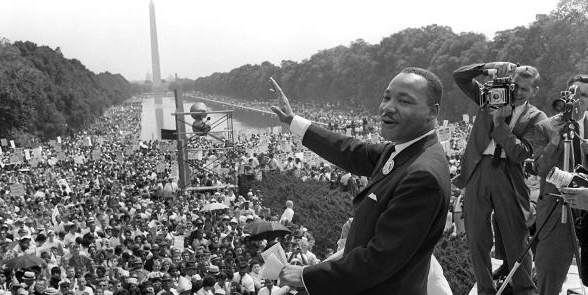 Clarence Jones, the advisor to the Rev. Martin Luther King, Jr. who co-wrote an early draft of the "I Have A Dream Speech," recounted the story Monday of how King delivered the most famous part of the speech spontaneously.

Jones was part of a Television Critics Association panel Monday about PBS's "The March." Denzel Washington provides the narration for director John Akomfrah's PBS film about the 1963 March on Washington. It airs on Aug. 27, the eve of the 50th anniversary of the march.

The day culminated in King's address to hundreds of thousands of people at the Lincoln Memorial, and millions watching him on television for the first time.

"Very few people know — most people do not know — that the speech that he gave was not the speech that he had intended to give," said Jones, author of the books "What Would Martin Say?" and "Behind the Dream: The Making of the Speech That Transformed a Nation."

The speech might have turned out very differently if not for an exhortation from King's favorite gospel singer, Mahalia Jackson, Jones said.

"When Mahalia shouted to him, I was standing about 50 feet behind him… and I saw it happening in real time. He just took the text of his speech and moved it to the left side of the lectern. … And I said to somebody standing next to me: 'These people don't know it, but they're about to go to church.' I said that because I could see his body language change from the rear. Where he had been reading, like giving a lecture, but then going into his Baptist preacher mode.

"Had there been anyone else — anyone else — who had shouted anything to him — I think he would have been a little taken aback. I'm not so sure he would have departed from the text of his speech. But Mahalia Jackson was his favorite gospel singer. When Mahalia said that it was almost like a mandate to respond."