The 2018 TCA Awards are all handed out, but there was more to see Saturday than just some trophy presentations. TheWrap was in attendance at the Beverly Hilton’s International Ballroom, where Robin Thede emceed the annual summer event.

Here’s what else we witnessed:

We’re All Winners!
Well, not really — but here’s the complete list of people who did win.

Robin Thede’s New Gig
In July, BET canceled late-night comedy series “The Rundown With Robin Thede.” On Saturday, Thede was all ours.

To open, Thede asked all in attendance to stand with hands over hearts, then cued the theme song to “The Americans,” our new national anthem. Politics aside, it was the FX thriller’s night. Later in the monologue, Thede cracked jokes about the Trumps, “Handmaid’s Tale,” “The Crown,” Rachel Dolezal, Netflix and many others.

And Now, for Something Nice
Critics honored the late Anthony Bourdain with Outstanding Achievement in News and Information for his work on “Parts Unknown,” which was accepted on behalf of the celebrity chef by the CNN program’s director/producer Morgan Fallon.

“I loved Tony,” Fallon said. “I really loved Tony. I spent a lot of time with him and at the core of what I think he did, and what I hope we helped him do, was the idea he could walk through any door and sit at a table with the same humility, same respect, regardless of who he was sitting across from. I think we need that more now than ever.”

Here’s a Guy Who Wasn’t Honored
Donald Trump was a popular target tonight — and not just of the professional comedian emceeing the event. Yes, Thede took some shots at the president and first lady, but so did some of the TV critics during their scripted pre award-presentation banter. As you might expect, it all played well in the friendly Beverly Hilton ballroom.

John Oliver Thinks We’re all Dead
John Oliver won his well-deserved variety/sketch award — and the rest of the night too, with the evening’s best acceptance speech. And he wasn’t even here.

Talking in a pre-recorded video and posing with a giant bottle of hand sanitizer from New York City, Oliver empathized with the critics and journalists on their 11th day of the summer press tour. He assumed at least 40 percent of us have died since he was here on Day 1, which is not really a bad guesstimate.

“Do have fun at the CBS panel tomorrow,” Oliver left us with. “Whatever would you ask?”

Rachel Brosnahan Sent an Email, So That’s Cool
“Marvelous Mrs. Maisel” lead Rachel Brosnahan couldn’t attend the awards to accept Individual Achievement for Comedy, for one reason or another, so she sent an email in her place, signing off with the word “Cheers.” She beat Ted Danson, among others.

Four awards later, during his own acceptance speech, “The Good Place” creator Mike Schur gave us the ultimate callback: “Rachel Brosnahan ending her speech with ‘Cheers’ was kind of a dick move because Ted was right there.”

Kickass T-Shirt, Tom Rob Smith
Much of the cast and many producers from “The Assassination of Gianni Versace: American Crime Story” showed up to accept their award for best miniseries, and they were all dressed to the nines. Well, minus one.

Executive producer Tom Rob Smith did all of the talking while wearing a t-shirt and jeans. To be fair, the t-shirt DID have a pocket. 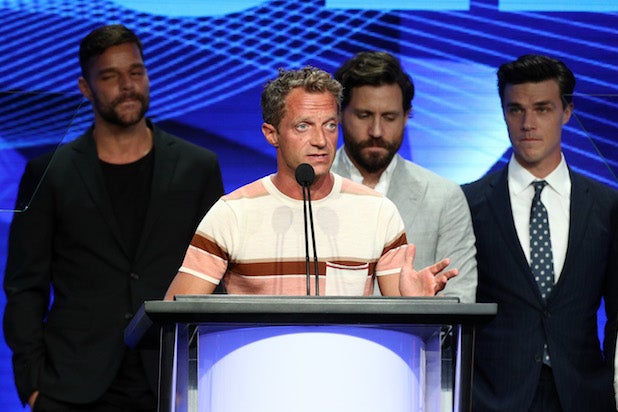 Also Read: The One Thing Danny DeVito Won't Do on 'It's Always Sunny in Philadelphia'

Danson Channels Sam Malone
Danson was in attendance to accept the Outstanding Achievement in Comedy award (but not Individual Achievement for Comedy — see above), along with Kristen Bell, his other “Good Place” co-stars and Schur. But before he took the stage for that honor, Danson paid tribute to what will forever be his greatest role, by handing out drinks for the cast a la “Cheers.”