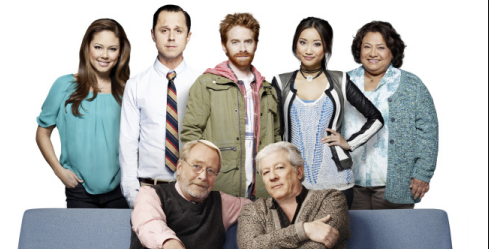 Seth MacFarlane's upcoming Fox show "Dads" is filled with racial jokes — but the butt of all of them is a white male, the show's cast and producers said Thursday.

Stereotypes abound on "Dads," and come from the old-school-in-a-bad-way, socially out-of-step dads. One mistakes a woman of color for the maid. There's a joke likening a boxing match to a game of "punch the Puerto Rican." A young Asian woman dresses up as an anime character.

But in every case, the real target of the joke is the white male making it, the producers and cast said in a Television Critics Assn. panel Thursday. They were peppered with questions from reporters about whether their jokes were offensive, lazy, or something else.

"Just to be fair, these are some pretty disparaging portrayals of white men," joked star Seth Green. "It's helpful to have an Archie Bunker… so that Rob Reiner can say, 'Archie, it's just not okay.'"

Peter Riegert and Martin Mull play the dads who invade the lives of their sons, played by Green and Giovanni Ribisi. They offend everyone in sight, particular the three women of color who round out the cast: Tonita Castro, Brenda Song, and Vanessa Lachey.

Lachey said the show merely points out existing prejudices in order to mock them. She told an anecdote about an older in-law who saw nothing wrong with calling Asian-Americans "Orientals."

MacFarlane didn't attend the panel Thursday, but its other executive producers did. They include "Simpsons" vet Mike Scully and "Family Guy" vets Alec Sulkin and Wellesley Wild.

The meanest joke in the pilot has nothing to do with race: It comes when one of the dads, played by Riegert, is asked if a picture of Rocky Dennis, the boy with a lethal cranial deformity featured in the movie "Mask," is of him. He objects that Dennis was "one of the ugliest people in human history."

Asked about the joke, Suskind said it happened to him. He had bought a portrait of Dennis at an art show, and his maid asked him if it was of him.

But the moment is also an important plot point, Riegert said: It makes him give a picture of himself to his son.