The Academy’s Scientific and Technical Awards ceremony, which took place Saturday night at the Beverly Wilshire hotel, demonstrated a couple of things conclusively.

First, it showed that filmmaking is a very complicated business, particularly to those of us who can’t tell high fidelity reflectance data from sub-pixel offsets of the CMOS array sensor.

Second, it showed that the people who do understand that stuff need to have a pretty good sense of humor.

The Academy’s annual tribute to the folks who put the sciences into the Academy of Motion Picture Arts and Sciences, the ones whose scientific and technical breakthroughs make it possible for all those better-known Oscar nominees to do their jobs, was also a night for nerd jokes. 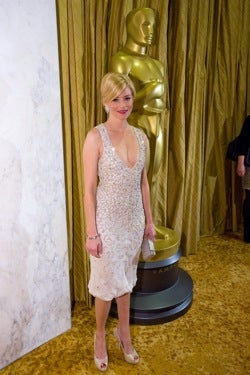 The clip from that last film, which ended the montage, featured brief shots of Banks in her underwear. “Wow, thank you,” she said when she took the stage. “That was really my ass and boobs. That was unexpected.”

Banks’s job meant not only reading explanations of things like point-based rendering and high-fidelity reflectance data, but also announcing winners with names like Gyula Priskin and Mark Jaszberenyi.

“As you might have guessed, I am not an expert” in the science of movie-making, said the actress, whose appearance in the “Spider-Man” movies apparently qualified her for a gig that always goes to a young actress who’s appeared in one or two effects-laden films.

Her lack of knowledge, she added, was “Not because I am a blond. Or a woman. It’s because I’m not a nerd.”

She quickly added that she respects nerds, depends on them for things, and even married one. But those jokes turned into the running theme of the evening – and by the time she said something about zits, and then added, “not that I get zits; I’m just trying to relate to you guys,” you could hear a little grumbling in the audience.

For the most part, though, the crowd laughed at Banks’ nerd jokes and applauded her for making her way through technical descriptions that she admitted she was going to “read but not fully understand.”

The Sci-Tech Awards ceremony is an unusual event, where the warmup act is almost always a magician (it was Dana Daniels on Saturday), every winner gets to talk for as long as he wants (yes, the honorees were exclusively male), the audience is full of people from ILM and Texas Instruments and Fujifilm instead of Paramount and Warner Bros., and many of the achievements being honored have been in the works for years, and in some cases even decades.

The event, said AMPAS president Tom Sherak in his introductory remarks, began in the bar of the Beverly Wilshire in 1975, when Gregory Peck and then-Academy president Walter Mirisch hosted a small, informal ceremony.

Since then the show has grown, with the Academy’s Scientific and Technical Awards Committee selecting notable achievements each year and recommending three categories of awards: Technical Achievement Awards, which are given in the form of Academy certificates; Scientific and Engineering Awards, which bring with them Academy plaques; and Academy Awards of Merit, which are the rarest Sci-Tech Awards and earn the recipient Oscar statuettes.

This year, no statuettes were awarded; 13 recipients received certificates for five different accomplishments, while another 33 received plaques for 10 different innovations.

Then again, one of the honorees, Hilmar Koch, admitted that his field is a touch esoteric. “My friends tell me that ambient occlusion is the best thing I’ve ever done,” he said, “because any time they have trouble falling asleep they call me up and ask for an explanation.”

By 10 p.m., the awards had all been handed out and about 40 of the honorees had delivered their acceptance speeches.  (A few couldn’t make it.) Before the winners posed for photos on the stage (for a shot, they were told, that’ll appear on the Oscar telecast) and the guests headed for the door with little goodie bags of chocolate Oscar coins, Banks returned to the stage one last time.

“I really am truly honored to be part of this evening,” she said. “It’s a great reminder of everything that goes into what we see at the movies.”

She paused. “I thank you for your nerd-dom.”

To Mark Wolforth and Tony Sedivy for their contributions to the development of the Truelight real-time 3D look-up table hardware system.

The LUTher system was one of the first color look-up table processors to be widely adopted by the pioneering digital intermediate facilities in the industry. This innovation enabled accurate color presentation by facilities that had analyzed projected film output and built 3D look-up tables in order to emulate print film.

To Steve Sullivan, Kevin Wooley, Brett Allen and Colin Davidson for the development of the Imocap on-set performance capture system.

Developed at Industrial Light & Magic and consisting of custom hardware and software, Imocap is an innovative system that successfully addresses the need for on-set, low-impact performance capture.

To Hayden Landis, Ken McGaugh and Hilmar Koch for advancing the technique of ambient occlusion rendering.

Ambient occlusion has enabled a new level of realism in synthesized imagery and has become a standard tool for computer graphics lighting in motion pictures.

To Bjorn Heden for the design and mechanical engineering of the silent, two-stage planetary friction drive Heden Lens Motors.

Solving a series of problems with one integrated mechanism, this device had an immediate and significant impact on the motion picture industry.

To Per Christensen, Michael Bunnell and Christophe Hery for the development of point-based rendering for indirect illumination and ambient occlusion.

To Dr. Richard Kirk for the overall design and development of the Truelight real-time 3D look-up table hardware device and color management software.

To Volker Massmann, Markus Hasenzahl, Dr. Klaus Anderle and Andreas Loew for the development of the Spirit 4K/2K film scanning system as used in the digital intermediate process for motion pictures.

The Spirit 4K/2K has distinguished itself by incorporating a continuous-motion transport mechanism enabling full-range, high-resolution scanning at much higher frame rates than non-continuous transport scanners.

To Michael Cieslinski, Dr. Reimar Lenz and Bernd Brauner for the development of the ARRISCAN film scanner, enabling high-resolution, high-dynamic range, pin-registered film scanning for use in the digital intermediate process.

The ARRISCAN film scanner utilizes a specially designed CMOS array sensor mounted on a micro-positioning platform and a custom LED light source. Capture of the film’s full dynamic range at various scan resolutions is implemented through sub-pixel offsets of the sensor along with multiple exposures of each frame.

Developed for the digital intermediate and motion picture visual effects markets, the Northlight scanner was designed with a 6K CCD sensor, making it unique in its ability to produce high-resolution scans of 35mm, 8-perf film frames.

To Steve Chapman, Martin Tlaskal, Darrin Smart and Dr. James Logie for their contributions to the development of the Baselight color correction system, which enables real-time digital manipulation of motion picture imagery during the digital intermediate process.

Baselight was one of the first digital color correction systems to enter the digital intermediate market and has seen wide acceptance in the motion picture industry.

To Mark Jaszberenyi, Gyula Priskin and Tamas Perlaki for their contributions to the development of the Lustre color correction system, which enables real-time digital manipulation of motion picture imagery during the digital intermediate process.

To Brad Walker, D. Scott Dewald, Bill Werner and Greg Pettitt for their contributions furthering the design and refinement of the Texas Instruments DLP Projector technology, achieving a level of performance that enabled color-accurate digital intermediate previews of motion pictures.

To Paul Debevec, Tim Hawkins, John Monos and Mark Sagar for the design and engineering of the Light Stage capture devices and the image-based facial rendering system developed for character relighting in motion pictures.

The combination of these systems, with their ability to capture high fidelity reflectance data of human subjects, allows for the creation of photorealistic digital faces as they would appear in any lighting condition.