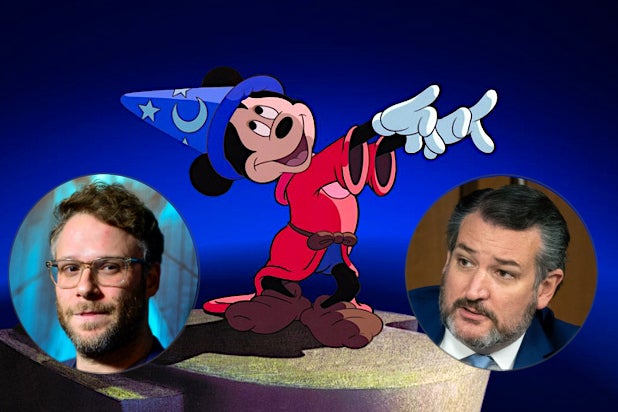 Republican Senator Ted Cruz got into a social media tiff with actor Seth Rogen over an unlikely spark: Walt Disney’s classic 1940 animated film “Fantasia.” one of Cruz’s followers asked what was the first film he saw in theaters.

The exchange began on Thursday when the Texas Republican responded to a tweet from MGM Studios asking the first film people had seen in theaters. “‘Fantasia,'” Cruz said. “It was playing at a film revival. It scared me; I cried–I was 4. My Mom had to take me out. Good times.”

On Friday, Rogen shot back: “Everyone who made that film would hate you.” (The star of “Superbad” and “Neighbors” also tweeted other criticism of Cruz, whom he called “a white supremacist fascist” and “a clown.”

Cruz ignored the insults, but did respond to the criticism about the creators of “Fantasia.” “They’re all dead. So I think we’re good. And Walt Disney was a Republican,” he replied on Saturday. “Even though you behave online like a Marxist with Tourette’s (screaming “F U! F U!” is really, really clever), your movies are typically pretty funny. I’m sure you hate that I enjoy them.”

Cruz has been on the hot seat with the left these days (and some on the right). A Washington Post op-ed labeling him and Senator Josh Hawley “the Constitution’s most dangerous domestic enemies” for “fueling the doubts of a large majority of Republicans about the legitimacy of the 2020 election.” Seven of his Senate colleagues have filed ethics complaints about them, calling for an investigation and “strong disciplinary action.”

This isn’t the first public squabble between Cruz and Rogen. After Cruz condemned President Biden on Twitter for rejoining the Paris Climate Agreement, Rogen called the Texas senator a “fascist.” Cruz shared a screengrab of Rogen’s comment and wrote, “If you’re a rich, angry Hollywood celebrity, today’s Dems are the party for you.”