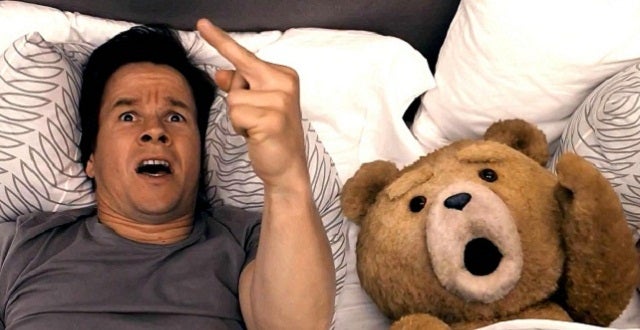 “Ted," Seth MacFarlane's ribald tale of a trash-talking teddy bear, crossed the $300 million mark at the overseas box office this weekend after taking the top spot in Japan for the third week in a row.

It did $4.2 million over the weekend in its final international market, and has taken in $18.8 million there in 16 days.  That makes it the highest-grossing R-rated comedy ever in Japan. With its $218 domestic total and another $303.8 million from overseas, the worldwide total for Universal's comedy is now $522.6 million.

The overseas total for "Ted" is particularly impressive, since comedies often don't travel well. Many jokes and laughs often don't translate well, literally. But the fact that the main character in "Ted" — sorry Mark Wahlberg — was so easily dubbed, enabled it to be customized for particular markets. And that's gone a long way to it becoming the highest-grossing R-rated comedy of all time at the worldwide box office, topping Universal's "The Hangover," which took in $467.5 million worldwide in 2009.

"Django Unchained," meanwhile, continued to roll up very impressive numbers abroad. It topped all movies with $30.6 million from 66 markets to raise its international total to $158.2 million. With its domestic total of $158.2 million, the worldwide total for director Quentin Tarantino's slave saga is now $309.1 million.

The international total for "Lincoln" now stands at $32 million, ahead of its seven-market expansion next week, which includes Australia and Argentina.

"Zero Dark Thirty,' yet another Best Picture Oscar nominee, took in $3.7 million from eight territories for Universal. It debuted in 296 locations in Germany, and brought $892,000, considerably stronger than "Argo" and "The Hurt Locker," director Kathryn Bigelow's previous movie. Its taken in $13 million overseas for Universal, which is distributing the film through much of Western Europe.

Warner Bros.' “The Hobbit: An Unexpected Journey' continues to bear down on the $1 billion mark at the global box office. Peter Jackson's first of three “Lord of the Rings” prequels added $4.2 million this weekend to raise its international total to $653 million. With its $296 million domestic total, its global gross stands at $949 million, with a China opening yet to come.

“Hansel and Gretel: Witch Hunters” took in $15 million from 36 markets for Paramount, raising its foreign total to $62 million after three weeks. Its best territory was Brazil, where it took in $2.7 million in its second week at No. 1 in that country. It has taken in more than $10 million there.