Apple TV+’s acclaimed comedy “Ted Lasso” returns for its second season next week, and critics are already praising the new episodes as “more ambitious” and “an impressive triumph.”

The comedy stars Jason Sudeikis as Ted Lasso, an American football coach hired to manage a British soccer team. (The character was initially conceived for a series of ads for NBC Sports’ Premier League coverage.) Season 2 picks up in the aftermath of Lasso’s team getting booted from the Premier League due to their loss at the end of Season 1.

“Ted Lasso” quickly became one of the most popular series on Apple’s fledgling streaming service upon its release last year, thanks largely to a strong response from critics and positive buzz on social media. The show was praised at the time for its optimism and feel-good sense of humor — two qualities which also earned shout-outs from critics in reviews of Season 2. 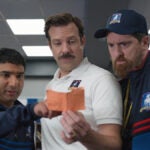 The 12-episode second season currently sits at a 100% “fresh” rating on Rotten Tomatoes based on a total of 15 reviews. Critics hailed the episodes as “funnier, deeper and more ambitious” and “a more aspirational entry” in the feel-good storytelling genre.

“The 12-episode new season … establishes the staying power of ‘Lasso,’ and then some. Funnier, deeper and more ambitious than the inaugural outing, the new episodes (six were provided in advance for critics) offer the same joyous good time, with the volume turned up. Sudeikis and his co-creators have said the show will only run for three seasons, but it feels as though ‘Lasso’ could stream for years.”

“Despite the bumpy start, season 2 of Ted Lasso … maintains its comedic charm while expanding the world of its characters, and even taking a few creative risks.”

“Ted Lasso still feels like Ted Lasso, and while there will be a lot more to say about the season once everyone has seen it, for now, that’s an incredible relief — and an impressive triumph.”

“The emotional intelligence of Ted Lasso remains remarkably high. It’s what continues to elevate the series above common feel-good stories, which are often given a pass by audiences to exist as middle-of-the-road creations that opt for simplicity over nuance. But Ted Lasso is a more aspirational entry in this specific lane of storytelling.”

“No show has ever celebrated the beautiful joys of an underdog story quite this way before, an energy that makes the upcoming premiere of Season 2 a complicated and fascinating thing.”

“Ted Lasso as a whole remains a delightful and quirky comedy that highlights the best of humanity, revealing how kindness and humility can be a conduit to happiness and success. It’s still the show we all needed last year, but it’s also the show that we need today.”