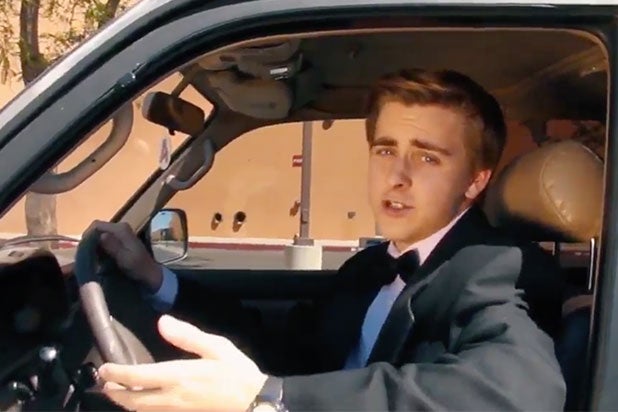 A teenager from Phoenix, Arizona put together the prom proposal of all prom proposals and remade the opening scene of “La La Land” to ask star Emma Stone to the dance.

Jacob Staudenmaier is a 17-year-old high school student who went through extraordinary measures to ask the actress to his prom at the end of the month. Along with several friends who served as extras, he recreated the opening scene of the movie where cars are jam-packed on the Los Angeles freeway.

He opens the scene by singing, “I need a date to prom/ I should have done it earlier/ But now I’ll sing this song/ I think I’m kind of freaking out/ This song took so much time/ And I’m finding this real hard to rhyme/ It’s fine, I’m fine.”

He continues, “Jacob Staudenmaier is my name/ Emma Stone if you came/ I think I’d lose it, Go insane/ We’ll have to see…I hope you’ll want to come on down/ I’ll see your face and think of how/ I got so lucky.”

And he even says he’s been told he looks like Ryan Gosling although “that’s a big far-fetched.”

“I know my voice ain’t great,” Staudenmaier continued. “But please be my prom date!”

It’s a pretty elaborate prom proposal and a well-made recreation of the opening number of the Oscar-winning film — However, there is no crane lifting the camera up while everyone dances on the freeway in the remake like it was done in the original.

The original scene, which is six minutes long, comes before the opening credits. Seemingly unspooling without a cut, it is a huge dance number that takes place on a Los Angeles freeway overpass during a traffic jam. Dozens of drivers jump out of their cars and join in a choreographed extravaganza set to the original song “Another Day of Sun” by composer Justin Hurwitz and lyricists Benj Pasek and Justin Paul.

Watch the proposal below.