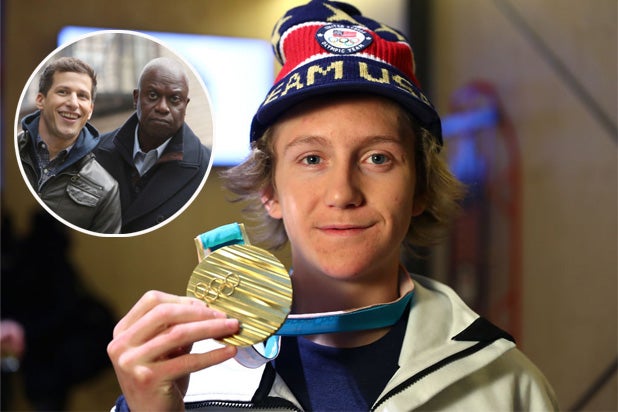 The night before 17-year-old Red Gerard became the youngest American man to win gold at the Olympics in 90 years, he was binging “Brooklyn Nine-Nine.”

According to a Yahoo News profile of the athlete, who took home the gold in men’s snowboard slopestyle in Pyeongchang, South Korea on Sunday, Gerard overslept the morning of his event because he was up late hanging out with his teammate Kyle Mack, binging the Fox police comedy.

“Gerard was supposed to get up at 6 a.m. At 6:20, Mack said, ‘Red, you out of bed yet?’ He wasn’t,” Yahoo’s Jeff Passan wrote. “Eventually, he rolled out, grabbed an egg sandwich with ham, avocado and cheese, panicked that he couldn’t find his puffy jacket, borrowed Mack’s and headed to the hill, where his future awaited him.”

And Gerard isn’t the only Olympian fan of the show. In an interview ahead of the games, figure skate Mirai Nagasu — who recently became the first U.S. woman to land a triple axel at the Olympics — gave “Brooklyn Nine-Nine” her own shoutout.

“During these times of pressure and stress, I find that comedy really helps get me through it, and that is a funny show, so I’d definitely recommend it,” she said.

In an statement to Yahoo, showrunner Dan Goor said he was “incredibly flattered and excited” to hear that the athletes are fans of the show, including an invitation for Gerard and Nagasu to appear on the show as themselves.

“First of all, we’re all huge fans of both of them (and any other Olympian who watches the show, irrespective of sport or national team, but mostly we are fans of them because they are amazing),” he said. “Secondly, I would love to do an episode where Jake Peralta and Mirai Nagasu chase an archvillain across a frozen-over parking lot, and just when he thinks he’s gotten away, Red Gerard and Charles Boyle snowboard out of nowhere and take him down.”