A version of this story about “A Hidden Life” first appeared in the Oscar Nominations Preview issue of TheWrap’s Oscar magazine.

Jörg Widmer has worked with director Terrence Malick on seven movies dating back to 2005’s “The New World,” but “A Hidden Life” is the first time he’s served as director of photography rather than as a camera operator for Malick’s usual cinematographer, Emmanuel Lubezki. That history meant that Widmer knew what to expect — long takes, natural light, a limited set of lenses — going into “A Hidden Life,” the rapturous chronicle of Austrian conscientious objector Franz Jägerstätter, who was executed by the Nazis for refusing to swear allegiance to Adolf Hitler in World War II.

“It was kind of easy, because we know each other,” Widmer said of stepping into the D.P. role to achieve Malick’s typically gorgeous and mystical look. “The difference was that I was more involved in the preparation of the movie. I knew more about locations, about the color settings, the color palette for costume and production design. And even more important, I was much more involved in the postproduction.”

And while the film is far more linear and narrative-driven than the other movies Malick has made in recent years, the director’s usual free-flowing process didn’t change much. “We planned to tell the story consecutively, so it was chronological: We started in the Alps and ended in the prison in Berlin,” Widmer said. “There was a kind of order. But in the daily work, the scenes were clear and the actors had lines, but then everything evolved according to the possibilities we could try out.

“The takes didn’t end when you finished the scene. They weren’t two-minute scenes — they could be 10 minutes, could be 20 minutes. I think the longest take was about 40 minutes. You would follow the light, follow the mood, follow the kids if they are playing.” 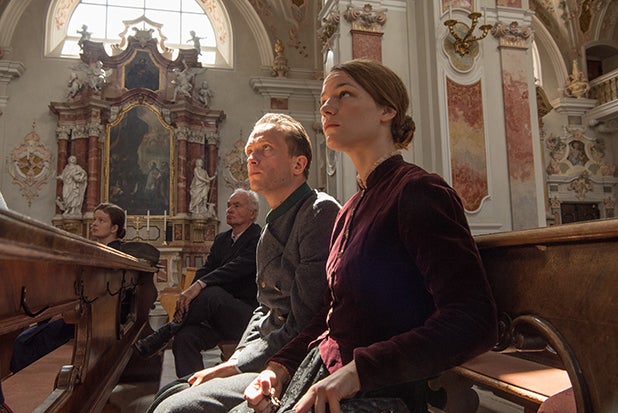 Malick prefers to use natural light, which can complicate things at time. “As much as we could, we used natural resources,” Widmer said. “So if you go inside, you have to find the right spaces. If there are lots of windows, you have to darken them. You have to handle the light. And unlike filming in Texas or Los Angeles, you can have a lot of clouds — there are days when you don’t have happy weather, and you have to live with that as well.”

From the start, he said, he knew that the film would move from light to darkness. “When Terry approached me for the first time, I knew what it was all about,” he said. “For sure, we needed to show how beautiful nature could be. We had to capture this expression of harmony at the beginning of the movie. And then the imprisonment needs to be dark, with only little leaks for the light to come in the window — but there is still a little hope that you can come home one day.”

Because “A Hidden Life” was Malick’s first all-digital film, Widmer didn’t have to worry about running out of film. But mostly, he said, the emphasis was on the process that helped actors August Diehl (Franz Jägerstätter) and Valerie Pachner (Franz’s wife, Fani) sink deeply into the characters and the lifestyle.

“It was a very playful exploration, and we would continue to explore until the actors feel that they are not performing anymore,” he said. “They really are farmers and they live their lives as Franz and Fani. In most movies, the take ends and you are the actor again, but in this one there was a certain magic in the transformation.”

Where does “A Hidden Life” rank among the legendary auteur’s output?