Twitter, Facebook and Instagram offer journalists the perfect platform to promote their work and live shot locations in an effort to boost viewership, but security experts tell TheWrap that users should think twice about what information they share.

And the fatal on-air shooting of two TV reporters in Roanoke, Virginia, on Wednesday showed just how vulnerable journalists can be when working in the field, a situation only made worse by the use of social media.

“It’s a darker use of social media,” veteran former FBI profiler Clint Van Zandt told TheWrap. “There’s something about us that lives vicariously through something like that. We want to see the violence, we want to feel the pain.”

According to police officials in Virginia, WDBJ reporter Alison Parker and cameraman Adam Ward were gunned down by disgruntled former colleague Vester Flanagan, while they were broadcasting live.

But the incident has shown that social media can serve not only as an asset to those looking to commit violent crimes but also a motivating factor in their actions, a way for them to achieve the notoriety they’re hoping for. 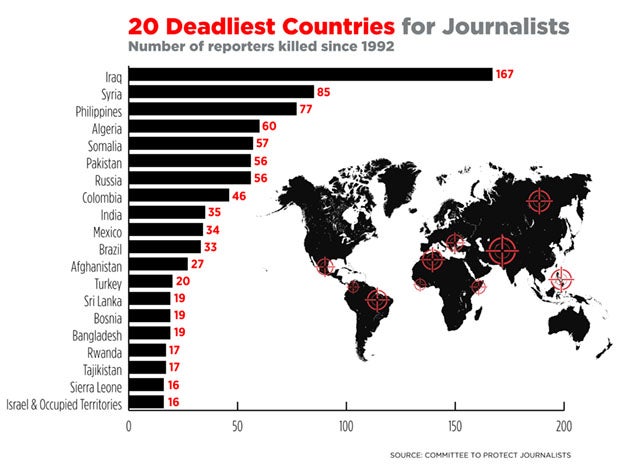 In addition to the footage captured by WDBJ’s own live feed, Flanagan recorded the attack himself on a mobile phone. He then uploaded the video to Twitter and Facebook. Within minutes it went viral.

Van Zandt, who was the U.S. government’s chief hostage negotiator during the 1993 siege at the Branch Davidian Compound in Waco, Texas, believes Wednesday’s shooting will likely inspire future copycat attacks.

“It’s kind of a violence high jumping where each individual has to jump higher or run faster or kill more people in a more media savvy way to get the coverage they want,” said Van Zandt, who retired from the FBI in 1995 after 25 years. “I have no doubt in my mind that there will be more individuals who will not only commit mass acts of violence, but will find new and creative to get that violence on social media.”

As a result, security experts warn that journalists should be more cautious in their use of Twitter and other online platforms to promote their work.

“Personally, I’m very leery of posting my location on social media,” CMP Group president and former NYPD detective Tom Ruskin told TheWrap. “There are plenty of promotional opportunities when doing taped pieces but when you go live, you should never give out your exact location.”

Other security experts believe that this was a one-off case of workplace violence, not indicative of a large problem.

“It was a perfect storm of a dangerous person who is media-savvy that wanted to commit murder,” said Bill Stanton, former NYPD officer and co-founding partner of behavioral analysis firm QVerity.

Five journalists have been killed in the U.S. since 1992, according to the Committee to Protect Journalists. Experts say that while any journalist dying is tragic, there’s no evidence to suggest a growing trend.

“This was an isolated incident by someone who was obviously deranged with a lot going on,” Stanton said. “The reason it’s getting so much attention is because the way it happened.”

Twitter, Facebook and LinkedIn were quick to shut down Flanagan’s accounts after the attack, but not quick enough to stop his stream of updates from hitting the web.

Whether the Virginia shooting is an isolated incident or a sign of things to come remains to be seen, but experts say social media will continue to influence our lives in ways we may not be able to predict. “Social media is here to stay,” Stanton said. “Whether it’s Twitter, or Snapchat or another form, I don’t know. But that’s the future we live in.”