With such films as “Time Bandits,” ‘Brazil,” “The Adventures of Baron Munchausen,” “The Fisher King,” “Twelve Monkeys” and “The Brothers Grimm,” Terry Gilliam has created a body of work that has earned the director a reputation as both an inspired visionary and a maverick. On and off-screen. Remember the legendary battle with Universal head Sidney Sheinberg over the distribution of “Brazil’? The collapse — mid-production — of “The Man Who Killed Don Quixote?

The American expatriate (he’s lived in London since the ‘60s) is up this weekend with “The Imaginarium of Doctor Parnassus,” a fantastical morality tale starring Heath Ledger, who died during filming. (Johnny Depp, Colin Farrell and Jude Law stepped in to help finish the production.) It features a magic mirror that, once passed through, reveals magical worlds. 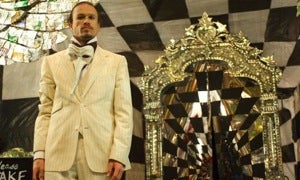 Gilliam, whose love of animation dates back to the ‘60s and his Monty Python work, makes liberal use of extended animated sequences throughout these scenes.

The director talked to TheWrap about the “Gilliam curse,” his memories of Ledger — and why he’d love to work at Pixar.
Tell us about Heath.
He wasn’t a neurotic James Dean or any of those things. Occasionally the gods send us down someone extraordinary, and we get to see them briefly, and then the gods pull them away. That’s how I feel about Heath.
The sad thing is we’ll now never get to see all his talent and capabilities fully realized. This was a guy who’d be directing, and he’d make a great director.
Do you believe your projects are cursed?
(Laughs) Things go wrong in movies, but look — on the one hand, Heath dies, which is tragic — but then you get Johnny, Colin and Jude coming to the rescue. So if it’s a curse, there’s also a silver lining.
You have a reputation for being a renegade with very little concern for the bottom line. How do you plead?
It’s totally undeserved, because until “Munchausen” I was known as this filmmaker who could make incredibly expensive-looking films for nothing. “Brazil” came in $1 million under budget and it only cost $13 to $14 million. “Time Bandits” cost less than $5 million and ended up grossing over $80 million.
The joke is, “Munchausen” comes along, goes totally out of control from day one and, of course, I get the blame for it. It cost $41 million, which is a bargain! The problem was, it was $20 million over budget, but no one will say the budget was $20 million under budget!
I don’t want to waste money on films, I’ve hated waste and so that is not a problem.
Is it true that you were so cash-strapped on “Parnassus” that you even took the bus to work?
It’s true! Everything was going crazy, as we had a huge insurance claim that was being argued while we literally ran out of cash. Luckily I got hit by a car and broke my back, so I got free travel for a while, and took the bus!
You love film, but will you shoot digitally at some point?
Yes, when it gets as good as film — but not till then.
So is film dead?
No, but it will be in 10 years, maybe five. It’s on life support. But right now, film’s still the best medium for capturing images, and the range of contrast is the greatest and you just get more information in there.
Any more animated projects on the horizon?
Not really. Ultimately it’s my fall-back position.
I’ve offered my services to Pixar. I said I’d even sweep the floors and mop up — and no one’s called me back yet! I’m serious! I keep thinking, one day I’d love to work at Pixar. I think they’re an amazing outfit and John Lasseter’s a genius, and Brad Bird — all those guys.
The culture they have is unique, and I think I’d be a good fit. Lasseter’s gone back to the way Disney was, with Walt there and great animators and great directors –and it all worked.
There’s such a trend now towards hybrid films that mix live action, effects and animation.
The truth is, so many of the big films today have some kind of animation — from “Harry Potter” to the big comic-book films like “Transformers” and “Iron Man.” My theory was, use animation because it’s cheaper and it’d give me more freedom.
There’s no doubt that this trend of hybrid films will grow, simply because animated films — however you define them — are the most successful movies being made today. You’re not going to get $200 million to do a Pixar, so for those of us with far smaller budgets, we become hybrid makers.
Where do you stand on the current 3D craze? It seems perfect for your mentality.
I’m not interested in 3D as a technique, but boy, it’s really pushing digital projection.
As for the year ahead, it’s going to be the huge tentpole movies and a few cheap ones — and nothing in between. Budgets are either $200 million or $2 million. It’s horrible right now. I say, all the creative people should just take the year off until the money people figure out what they want to do.
What’s next?
“The Man Who Killed Don Quixote.” We’re resurrecting the old bastard! My plan is to start in spring, and we’ll see if it’s just a dream or reality. Jeremy Thomas is producing and we’ll go back to Spain and the same locations, as I’ve learned what not to do there. (Laughs.)