Perhaps the most notable superhero absence in “Avengers: Infinity War,” after actual Avengers members Ant-Man and Hawkeye, was that of Valkyrie (Tessa Thompson), who was one of the leads in “Thor: Ragnarok.” “Ragnarok,” notably, ended right before “Infinity War” began, so it was kind of a big deal that she wasn’t even mentioned.

Valkyrie isn’t dead, of course — that much was confirmed by the Russo brothers and “Infinity War” screenwriters Christopher Markus and Stephen McFeely on the “Infinity War” audio commentary. Since Thanos only killed half of the Asgardians in his ambush, that must mean that either she’s with the half who survived or she left before Thanos’ ship ambushed them.

Whatever the explanation, there is now reason to believe that Valkyrie is going to show up in “Avengers 4.” While her appearance in the film has not been confirmed officially and likely won’t be for a while, at least, thanks to a trio of Instagram stories we can get our hopes up, at least.

The first is Chris Hemsworth’s Instagram story. He’s been in London filming the new “Men in Black” movie, and he said this week on his story that he was heading to Atlanta for an “Avengers 4” shoot. Hemsworth said: “Finished the London portion of ‘Men in Black.’ We go to Morocco, a little bit of Italy, a little bit of Paree. But first, we’re going to Atlanta for some ‘Avengers’ additional photography.”

The next portion of Hemsworth’s IG story, posted an hour later, shows him in front of a private jet with stuntman Bobby Holland Hanton, who is Hemsworth’s stunt double on “Men in Black” and both “Infinity War” and “Avengers 4.”

Then, on Tessa Thompson’s IG story, we see another video in front of the same private jet, with the caption “BYE LONDON.” Hemsworth appears in the video, as does Thompson herself.

Thompson, of course, is also starring in “Men in Black” with Hemsworth. 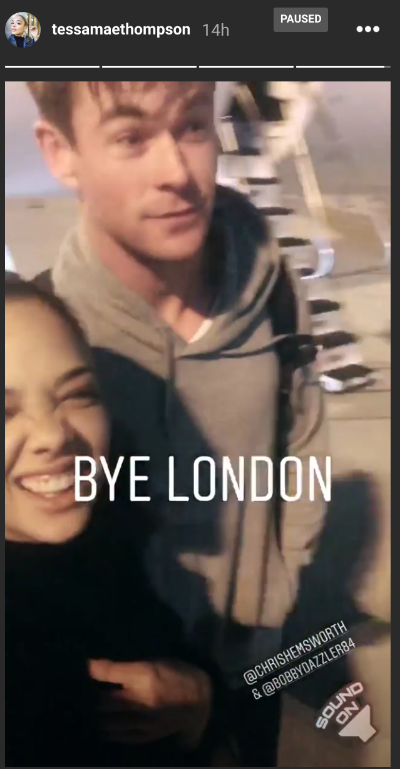 And, just in case you’re thinking this is all some kind of elaborate misdirection, Bobby Holland Hanton’s IG story actually shows Hemsworth and Thompson getting off the plane in Atlanta hours later. 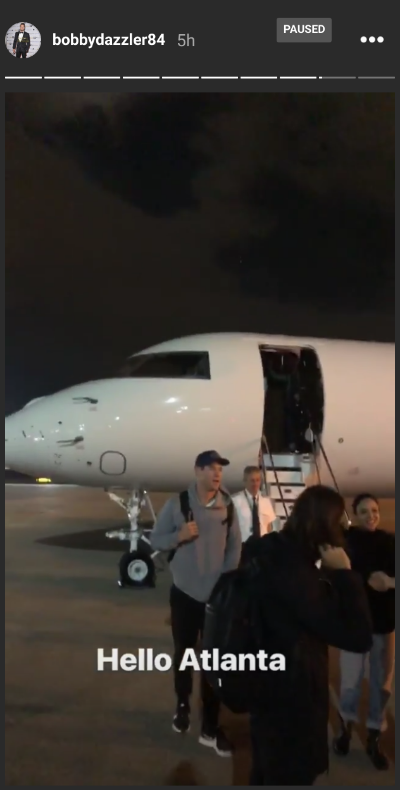 Does this confirm that Valkyrie is going to be in “Avengers 4”? Absolutely not. She might just be tagging along with Hemsworth to chill out between “Men in Black” shoots, or could just want to go to Atlanta for any number of other reasons.

All we know for sure is that Hemsworth and his stunt double took a private jet to Atlanta for “Avengers 4” reshoots, and that Thompson also rode to Atlanta on that same private jet.

However, this is not the first time Thompson has been linked to an “Avengers” set. Back in early 2017, Marvel was shooting something at Durham Cathedral in Durham, England. Hemsworth, Thompson and Mark Ruffalo were all spotted there, and it’s thus far unclear if what they shot was unused footage for “Infinity War” or something that we’ll see in “Avengers 4.”

Around the same time, the Russo brothers posted a photo of Joe Russo in the cathedral on Instagram (since scrubbed), and there were previous reports that “Infinity War” would be shooting there. So it’s not likely that they were doing additional shooting for “Thor: Ragnarok.”

Whatever is going on, we can’t help but get our hopes up that Valkyrie will have a key role to play in “Avengers 4.” But, given the level of secrecy that Marvel was able to maintain with the completely mad ending to “Infinity War” before it came out, we’re probably not going to find out for sure until we actually park our butts in movie theater seats to watch the thing next April.