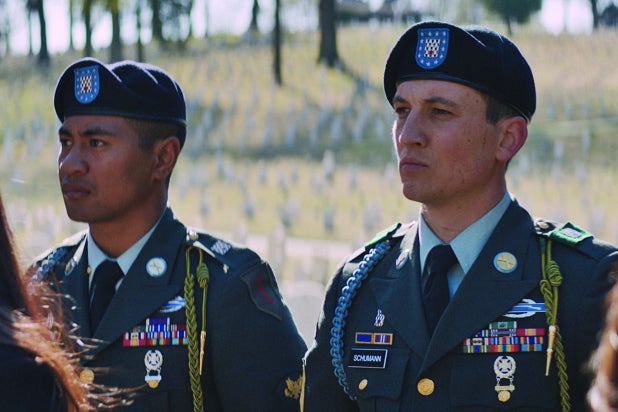 Given that “Thank You For Your Service” hits theaters amid a week of controversy over the U.S. president’s treatment of the widow of a fallen soldier, its message about the country’s ill treatment of veterans feels particularly timely.

But, despite its good intentions, the film feels more like a sequel to “American Sniper” — even shooting from what looks like the same Iraqi rooftop — than an examination of PTSD-stricken soldiers and the government’s inability to fully meet their needs. The association between the two films is not surprising, since “Thank You For Your Service” director Jason Hall wrote the screenplays for both movies, each based on non-fiction books.

In “American Sniper,” marksman Chris Kyle did several tours of duty and, once home, couldn’t leave the war behind. The home front is the focus of most of “Thank You For Your Service,” which follows a quartet of American soldiers who return from Iraq shattered in varying degrees. Re-integration proves daunting.

Watch Video: Miles Teller Shows the Scars of War in 'Thank You For Your Service' Trailer

The soldiers featured in “Thank You For Your Service” are haunted by memories of their combat experience. One has lasting injuries that have scrambled his brain; another is physically impaired. Coping is a challenge as they struggle with post-traumatic stress disorder. Unlike a few of their buddies, they lived through the war, but not without substantial psychic damage. When they return home, they must contend with infuriating bureaucratic hurdles.

The rather flat story never breaks new ground, nor does it fully explore the depths of PTSD. Early on there is a surprisingly shocking suicide that’s barely discussed afterward. These men came home changed, and they’re largely silent about it. What the film does communicate well is the failure and limitations of governmental bureaucracy. It’s shocking how easily red tape keeps them from getting the help they so desperately need.

Perhaps the most startling and disturbing moment in the film comes when a doctor tells Adam Schumann (Miles Teller) that thousands of men and women are waiting for access to PTSD treatment in special centers around the U.S. The backlogs are staggering. The film also sharply points out the attitude of military higher-ups who never see battle but still insist that the rank and file soldiers always show a brave face for the sake of new enlisted men. The toxic masculinity of military culture is touched on, making the viewer wish for a movie that focused more completely on the hazards of that mindset.

“Thank You for Your Service” takes place following a brutal tour of duty in Iraq in 2007. One of the first things we see is an artistically rendered shot of dozens of dogtags, looking like gilded jewels. Then we hear Teller intone in voiceover narration: “I was a good soldier, and I loved it.”

It’s intriguing that Teller has become the face of wounded masculinity, with both “Only the Brave” and this film currently in theaters. His performances in both are quietly commanding. But the stand-out role belongs to Beulah Koale (“Hawaii Five-0”), who plays the American Samoan soldier Tausolo Aieti, nicknamed Solo. He communicates fierceness and vulnerability in equal measure, and it’s a deeply poignant and revelatory performance.

Solo has suffered a serious brain injury and struggles with memory loss, but one thing he never forgets is how military service offered him salvation. He repeatedly tells people, “The Army saved my life.” Hall doesn’t give us the particulars, but we hear from his wife Alea (Keisha Castle-Hughes) that Solo had been arrested for drug possession.

Watch Video: Lady Gaga Reveals She Has PTSD: 'I Have a Mental Illness'

The military may have saved him from a life of addiction, but it exacted a heavy toll. Solo is tortured by memories of a fellow soldier who died on his watch. Koale’s portrayal is deeply moving. He’s the character we most feel for, as he struggles to stay strong amid growing confusion, depression and isolation.

The plot doesn’t have the tense excitement of “American Sniper,” but it also, mercifully, dials back the jingoism. It does indulge in a few shots of seemingly innocent Iraqis on the street looking menacing; one can’t help but wonder what they were feeling as Humvees full of brawny, mightily-armed American soldiers came barreling down their streets. The terror cuts both ways.

These soldiers survived an ambush and agonize over their fellow troops who didn’t. Yet, they don’t waste much thought about the rounds fired at the enemy. Did they always hit their targets? Were there no civilian casualties, or collateral damage that weighs on them? The film chooses to omit such complexities, with a nationalistic focus on American soldiers and the difficulties of adjusting to ordinary day-to-day life back in their Midwestern hometowns. What about the many facets of fighting a controversial war? What about innocent women and children caught in crossfires? Such concerns — and the reasons behind the Iraq War in general — don’t seem to concern these soldiers.

Teller’s Adam is tortured by survivor’s guilt, enduring flashbacks and hallucinations, and only occasionally alluding to his wife Saskia (Haley Bennett) what he experienced. She pushes him to open up, but he seems most himself with Solo and his other wartime pals.

Rather than offering much-needed insight, the film includes scenes that don’t advance the film much: Adam, Solo, and their buddy Will Walter (Joe Cole, “Woodshock”) joke repeatedly about a sex tape that Joe had made of his fiancée. Somehow we’re supposed to believe that they are the best of friends, but their chemistry doesn’t quite gel. Their bond is never established well enough.

Shoehorning in a musical montage with the trio singing along and dancing exuberantly to Haddaway’s 1993 Eurodance hit “What is Love” at a local bar doesn’t add much character heft. The emotional tune might have been used to highlight the vulnerability these guys push down under their macho exteriors, but it fails to convince.

The women in the film are given little to do. They come in two varieties: either they’re supportive, or they bail. And then there’s Amy Schumer drabbed down and with dark hair. While it’s intriguing to see her in a dramatic role, her few spoken lines essentially amount to a cameo.

At one point, Solo goes to a party and watches a brutal dogfight. When one of the pit bulls is left for dead, he picks up the battered, bloodied dog and takes him over to Adam’s house. Mystifyingly, Adam stitches up the nearly dead dog, as if he were an expert surgeon. Was some key piece of exposition left on the cutting room floor? The only job we’ve heard he’s had before his service was as a groundskeeper. But, miraculously, the wounded dog not only survives, but flourishes. Rather than providing a sense of the characters, this scene merely takes the viewer out of the movie.

The story undertakes an undeniably worthy subject. But “Thank You for Your Service” has too many moments that fall flat, seem unlikely, or don’t elicit the desired response. The complexities of PTSD deserve a better, more thoughtful and layered film.