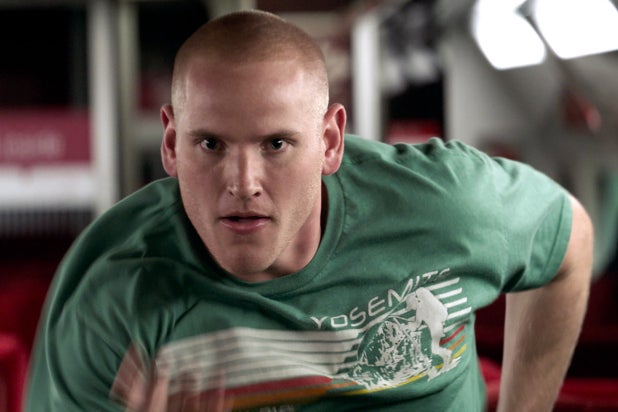 It’s impossible to say how tragic the situation might have been on Thalys train 9364 on August 21, 2015, had three Americans — Anthony Sadler, Alek Skarlatos, and Spencer Stone — not stepped in to intercept a terrorist sporting enough will and ammunition to cause countless deaths. But a few minutes of nail-biting, recreated heroism isn’t enough to justify the other 90-or-so minutes in Clint Eastwood’s dry salute of a movie, “The 15:17 to Paris,” which struggles to mix patriotism, friendship, God, and destiny into something meaningful.

Unlike the weighty punch of the director’s last couple of true bravery stories, “American Sniper” and “Sully,” the primary impression this effort leaves is that of an expensive memento.

The keepsake vibe stems from the fact that Eastwood daringly cast the three heroes as themselves, a bid for Harold Russell/Haing S. Ngor non-professional naturalism as admirable as it was mistaken, since one mostly watches these close friends as stunt performers (Can they pull it off?) rather than blended-in parts of a strong narrative. Hoping they do well from scene to scene — for Anthony’s casual insouciance to spice things up, for Spencer’s polite intensity to disarm, for Alek’s quiet macho charm to land — doesn’t exactly put one in the right frame of mind to get swept up in a movie.

After an opening that follows the would-be criminal as he walks his roller toward the fated train, Anthony narrates an introduction to him and his friends, seen riding in a convertible like the stars of a music video, as the movie travels back in time to show how a pair of earnest white boys and a wisecracking black kid became friends at a Christian middle school in Sacramento in 2005.

The bond was of the marginalized and mischievous: young Spencer (William Jennings) and Alek (Bryce Gheisar) favoring camo-wear, war games, and pranks to any overt “coolness,” while Anthony (Paul-Mikel Williams) is the smooth-talker they run into on trips to see the principal (Thomas Lennon).

Spencer’s mom Joyce (Judy Greer) and Alek’s mother Heidi (Jenna Fischer) battle their religious community’s stigmatization of single moms. Joyce worries that her kid isn’t focused enough to succeed at anything, which leads to one of the more ham-fisted moments in Dorothy Blyskal’s screenplay: the young, military-obsessed Spencer kneeling at his bed, praying to God, “Make me an instrument of your peace.”

Though circumstance splits the trio up as children, they stay in touch over the next decade. Spencer, who transforms his youthful pudginess into a warrior-like frame, pursues his dream of becoming an Air Force pararescueman, carrying an eagerness to save the day that causes one instructor to roll her eyes. Alek joins the National Guard, learns about weapons, and briefly sees service in Afghanistan. Anthony’s goals, meanwhile, outside of scenes watching sports and teasing his friends, are mysteriously ignored.

But when they all decide to convene in Europe on a holiday — sightseeing in Italy, biking in Germany, clubbing and beers in Amsterdam — Eastwood flirts disastrously with vacation slide-show boredom in his attempt to portray the ordinary before the extraordinary. Crammed in are clunky teases to what lies ahead: Spencer musing aloud about life catapulting you toward a purpose, and a German tour guide barking, “You Americans can’t take credit every time evil is defeated.”

See Photos: 'Unforgiven' Turns 25: 14 Reasons Why Clint Eastwood Film Is One of the Best Westerns

We get the fact that Hollywood usually makes everybody it dramatizes into hopelessly wittier and more interesting people than the real-life versions, and how sometimes correcting that glamorization is worthwhile, but these sequences take adherence to mundanity to a pulse-deadening extreme. I already assumed heroes ate gelato and used selfie sticks, but these drawn-out details don’t do much to set the scene.

By the time we reach the attack sequence, its realistic nerviness — from “Sully” vets Tom Stern’s fleet camerawork and Blu Murray’s editing — comes almost as a mood-altering relief: artfulness has arrived. There’s a casually physical authenticity to the quickness, the fear, the brutality, and the attention given a wounded passenger, that gives these tense minutes a heart-stopping believability.

It’s here that Eastwood the veteran flexes his muscles as a director not just of action, but also of people of action, and burnishes his status as a chronicler of the humanity surrounding such necessary violence. Whether you believe God put these (military-trained) regular Joes there (an idea the movie gently nudges) or subscribe to a faith in the sacrifice of good people whenever confronted with stopping harm, the depiction of the men’s clear-eyed reactions is a gripping account of unthinking valor.

But it’s a meander until then. If you’re looking for the type of curtain pullback on a harrowing event that Paul Greengrass crafted with “United 93” or “Captain Phillips,” or a philosophical character study along the lines of Eastwood’s “Sniper” and “Sully,” then “The 15:17 to Paris” is regrettably more a wading pool than an immersive dunk.