It’s a bad sign for a movie’s characters when the big, bold words “DAY 1” appear onscreen in an opening scene. Somehow, that never seems to mean “day one of a magnificent party,” or “day one of the free cash giveaways.” It’s an up-front warning about a grueling ordeal to come, the kind of story where everyone involved is likely to spend most of the film fervently longing for the simpler, happier day-one era.

In the case of “The 33,” Patricia Riggen’s heartstring-tugging melodrama about the 2010 Chilean mining disaster that became an international cause célèbre, that opening “DAY 1” card comes just before a cave-in traps 33 men at the bottom of a remote desert gold mine. Stuck 20 stories below surface level, under an unstable mountain slab described as “twice the mass of the Empire State Building,” they’re low on food and water from the start. As the titles move past “DAY 2” to “DAY 3” and then deep into double digits, the tension rises and falls, but the focus stays fixed on broad, simple emotions, delivered as forcefully as possible.

Spoiler warning for a five-year-old real-life event watched by an estimated 1 billion people worldwide: The miners were eventually rescued. Knowing that doesn’t make Riggen’s film less intense. But it does change the complexion of “The 33,” given that she interviewed the survivors and their families at length, and that the film was based closely on their testimony. Riggen’s screenwriting team (including “Dallas Buyers Club” co-writer Craig Borten and Ladyhawke and “Backbeat” writer Michael Thomas) adapted “The 33” in part from Héctor Tobar’s authorized 2014 book “Deep Down Dark.”

But they also licensed the story from the miners and respectfully incorporated their first-person accounts; that makes “The 33” feel less like an exploitative cash-in than most “based on a true story” fictions. But it also makes it even more frustrating that “The 33” is such pure Hollywood feel-good cheese, complete with broad clichés and cartoonish stock characters.

Even the most nuanced of the miners is a recognizable type — the unlikely hero who emerges in a crisis. When the weak shift boss, Luis Urzua (Lou Diamond Phillips), disintegrates under pressure, Mario Sepúlveda (Antonio Banderas) rises to the occasion, looking for escape routes, rationing the food, breaking up fights, and dispensing sound bites and inspirational speeches. He’s a tailor-made hero (literally: he’s a composite of several people, Urzua included), and Banderas imbues him with heart, but also a hammy effusiveness. 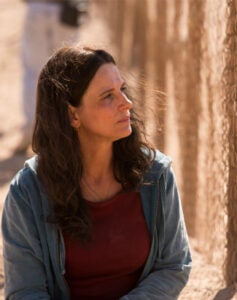 Most of the rest of the miners are reduced to minimal descriptions: Álex’s wife is expecting a baby. Darío is a shiftless drunk with a tragic past. Gomez, a 46-year mine veteran, was two weeks from retirement. Bolivian import Carlos was improbably, unluckily, working his first day on the job. Mostly, though, they’re all just interchangeable grimy, pained faces in the dark.

At least Riggen does remarkable things with that dark. Stylistically, this is a significant step forward past her previous films, like the gushy immigrant drama “Under the Same Moon” and the Disney Channel “Breakfast Club” update “Lemonade Mouth.” Riggen initially lights the mine scenes primarily with headlamps, creating beautiful effects as each miner becomes a slim, bobbing shaft of light in an oppressive darkness.

The CGI-assisted cave-in is a thrilling disaster-movie sequence that communicates the cave’s vast scope and the seeming impossibility of any rescue. And while she goes painfully over the top with a fantasy sequence that has the starving miners collectively hallucinating about food, all to the operatic strains of Bellini’s “Casta Diva” from 1831’s “Norma,” at least it suggests a strong, confident directorial point of view and a sense of humor.

But the film is gratingly emphatic about its primary-color emotions, especially via James Horner’s miserablist score. And it becomes strident and simplistic as it rushes to compact months of incident into two hours. The miners’ families, led by Darío’s mournfully estranged sister Maria (French actor Juliette Binoche, one of many featured players sporting a strained Spanish accent), are trotted out over and over for tearful tension. Setbacks and fights arrive on cue and prompt new inspirational speeches. The whole film becomes as mechanical as the oversized drills in play at the rescue site.

Briefly, once Chile’s young minister of mining (Rodrigo Santoro) and his chief engineer (Gabriel Byrne) finally establish communication with the miners, “The 33” recalls a much richer and more complicated movie. Like Billy Wilder‘s cynically sophisticated “Ace in the Hole,” another story about the exploitation of a man trapped by a cave-in, “The 33” looks at the worldwide media circus around the mine, and openly questions who stands to profit.

Other angles emerge as well: the mine owners’ ghastly (and never-punished) negligence, the Chilean president’s savvy consideration of the situation’s political angles. But while “The 33” can spare a few scenes to raise these issues, it has no time to pull them together, or to probe them for meaning. That “DAY 1” title card kicks off a countdown to a promised weepy catharsis, and the expected celebration of the human spirit. Ultimately, the film’s only meaningful agenda is hitting that mark on cue, as vigorously as possible.