“The 355,” a spy thriller starring Jessica Chastain and Lupita Nyong’o and the first wide release of 2022, brought in $350,000 in box office previews Thursday night from 2,300 theaters with screenings beginning at 7:00 p.m. The film opens on 3,145 North American screens this weekend.

The first weekend of January is always a quiet time at the box office, but Universal is kicking it off with its star-studded, female-fronted action film, which is projected to open between $5-7 million.

Unfortunately for “The 355,” the film is opening as the omicron variant of the coronavirus is spreading rapidly and forcing the cancellation of events across the country, perhaps putting a damper on the box office. But for comparison, Blake Lively’s spy movie “The Rhythm Section” opened in January 2020 before the pandemic and made $235,000 in Thursday previews before launching to a $2.7 million opening weekend. 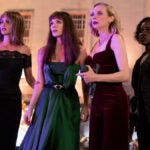 “X-Men” franchise filmmaker Simon Kinberg directed “The 355,” which is about a team of five spies who are each the top agents in their respective countries, including the U.S., Britain, Germany, Colombia and China, who must stop a mercenary from using a top-secret weapon.

The film also stars Diane Kruger, Penélope Cruz and Bingbing Fan as the other agents, as well as Edgar Ramirez and Sebastian Stan.

“The 355’s” screenplay is by Theresa Rebeck and Kinberg from a story by Rebeck. The film is presented by Universal Pictures in association with FilmNation Entertainment and is produced by Chastain and Kelly Carmichael for Chastain’s Freckle Films and by Kinberg for Kinberg Genre Films. The film is executive produced by Richard Hewitt.