You would expect a movie about militarized teens protecting the Earth from alien invasion to be pulpy, and “The 5th Wave” certainly is — but not in the good way. Like a bad orange, this adaptation of the series-spawning novel by Rick Yancey lacks both juice and flavor.

The film is being sold as science fiction, but sometime around the point where the heroine spies on her hunky comrade-in-arms chopping wood (before displaying his chiseled torso in a lake) we realize that this is actually yet another terrible YA movie — a genre that’s reached such levels of audience exhaustion that you can’t blame the marketers for trying to hide the truth.

Had “The 5th Wave” mined the material for audacity, humor or even just reckless adventure, this might at least have been a mindlessly entertaining alternative to Oscar fare, but instead it’s a tedious slog, one designed to be a tentpole for an ongoing series that, after 112 plodding minutes, few would anticipate with anything but dread. (Not even the scattered unintentional laughs are enough to make schadenfreude fans line up for a second helping.)

To its credit, the lead character here is not a Chosen One: Cassie (Chloe Grace Moretz) is a regular Ohio high schooler, texting her friends and awkwardly flirting with football player Ben (Nick Robinson, “Jurassic World”), until the day that alien ships start appearing in the sky. Then come the waves of the invasion: First, there’s an electromagnetic pulse that knocks out the power, the motor vehicles and the running water. Then the rivers and oceans rise, drowning a large segment of the populace. Finally, a particularly nasty strain of bird flu that kills millions more.

Cassie, her brother, Sammy (Zackary Arthur, “Transparent”), and dad, Oliver (Ron Livingston), are living in a refugee camp when news of the fourth wave arrives; Army officer Vosch (Liev Schreiber) sweeps in with several truckloads of soldiers to inform everyone that the aliens are now assuming human form, and that the children need to be whisked off to Wright-Patterson AFB, about 50 miles away, for processing, and that their parents will join them shortly. (Buckeyes will appreciate the attention to Ohio geography, although the film was shot in Georgia.)

Also Read: Can 'The Revenant' Beat Back 3 Newcomers to Finally Top Box Office? 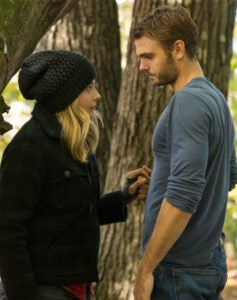 Accidentally separated from her family, Cassie must make her way through the devastated countryside (where any human could now be an invader in disguise) to find Sammy, who has become part of a squad (which also includes Ben) of kid soldiers the Army is training to fight aliens.

There is horror, or satire, to be mined from the sight of a bunch of 8- to-15-year-olds going through grueling physical and marksmanship training, but director J Blakeson (“The Disappearance of Alice Creed”) never bothers; nor does he successfully bifurcate the story between the military goings-on and Cassie’s travels (and her blossoming relationship with the helpful Evan, played by Tiger Beat-ready British actor Alex Roe).

It’s never a good sign when three prominent screenwriters each take a credited stab at adapting a best-seller, and Susannah Grant (“The Soloist”), Akiva Goldsman (“Winter’s Tale”) and Jeff Pinkner (“The Amazing Spider-Man 2”) so excessively telegraph each plot twist that the entire script may well have been written in Morse code. Any surprises that inattentive viewers might miss in the screenplay get put in blaring italics by composer Henry Jackman (“Captain America: The Winter Soldier”), whose score works itself into a lather at the slightest provocation.

Moretz, for her part, remains such an empathetic and direct young actress that she keeps Cassie grounded and interesting even when the plot goes a-wandering. As usual in YA movies, the notable adults (who also include Maria Bello and Maggie Siff) essentially phone it in — although who can blame Schreiber for wanting to save his energy for something like “Spotlight” instead?