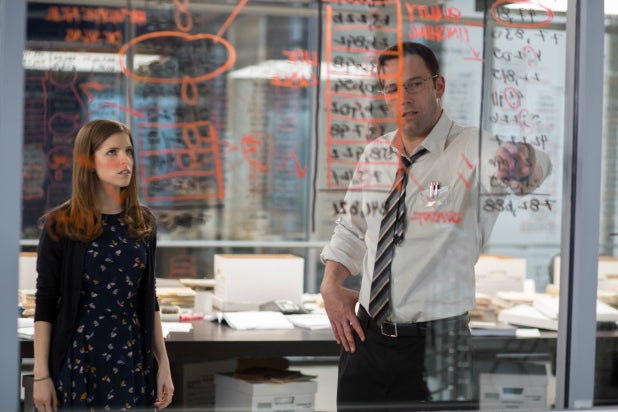 Call it “H&R Batman Begins”: Ben Affleck stars in “The Accountant” as a man with a beautiful mind for bookkeeping, fists of fury in hand-to-hand combat and an American sniper’s skill with a gun. And if that combo sounds bonkers, rest assured that this thriller is completely aware of the silliness of its premise, not that it ever allows that ludicrousness to get in the way of the fun.

Audiences willing to just go with the movie’s outlandish lead character will find laughs and thrills along the way, as well as that rarest of studio properties: a tentpole that actually leaves you enthusiastic about the prospect of a sequel.

Affleck’s Christian Wolff seems to be just another small-town number-cruncher, doing taxes for local farmers out of a nondescript strip-mall office. But in the screenplay by Bill Dubuque (“The Judge”) — which seems like it’s based on an airport novel but is, shockingly, an original property — Wolff is actually the man whom despots and drug kingpins the world over turn to when there’s a discrepancy in their books.

Wolff’s dealings with such notorious men captures the attention of Fed director Raymond King (J.K. Simmons), who in turn blackmails underling-with-a-past Marybeth Medina (Cynthia Addai-Robinson, “Arrow”) into tracking Wolff down. In an attempt to stay out of trouble, Wolff takes on a seemingly innocuous gig trying to find a financial leak in the books of robotics entrepreneur Lamar Black (John Lithgow), only to attract the homicidal attention of hired killer Braxton (Jon Bernthal).

Fully describing the plot of “The Accountant” would require note cards, a white board, and a series of pulleys — the movie also comes loaded with tons of flashbacks explaining how Wolff got to this place in his life, not to mention his awkward friendship with motormouth Dana (Anna Kendrick), an employee of Black’s. Factor in the honey-voiced Justine (Alison Wright, “The Americans”), a mystery woman on the phone who seems to be pulling everyone’s strings, and you’ve got a convoluted potboiler that dares you either to engage or to laugh at it. Engagement turns out to be easier than you might imagine.

Affleck’s character (“Wolff,” it turns out, is just one in a series of pseudonyms) is intense, socially awkward and brilliant; viewers are likely to deduce that he’s autistic, but the film doesn’t utter that word until about an hour in, which turns what’s supposed to be a reveal into an elephant in the room. Nonetheless, Affleck never overplays his hand; as questionable as it might be to exploit mental health issues for an action movie, there’s nothing in the performance that suggests the excesses to which actors will sometimes go when playing characters on the autism spectrum.

The rest of the performers elevate this goofy material, with Kendrick in particular scoring points as a woman doing her best to break through to a character who’s very hard to get to know. Director Gavin O’Connor treads over thematic areas he covered in “Warrior” — again we have two sons being raised by a disciplinarian who prizes violence as a survival skill — but this time around he’s in full-bore audience-pleasing mode. He and editor Richard Pearson (“The Bourne Supremacy”) wisely keep the pace at a brisk clip lest there be time to stop and ask too many questions.

“The Accountant” shouldn’t add up, but somehow it does. Whether or not audiences warm to a hero who’s equally skilled at tax codes and tae kwon do, the filmmakers certainly can’t be accused of going for the tried and true.