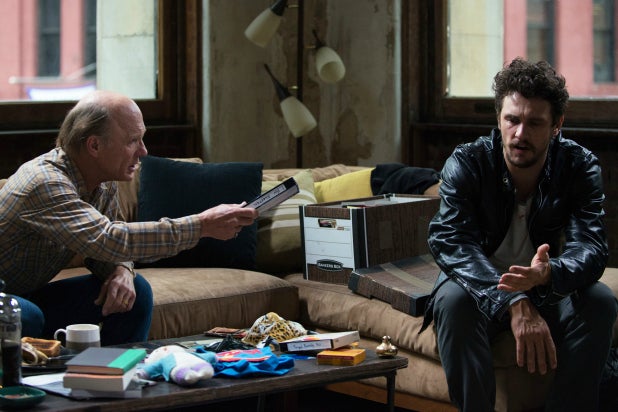 Elliott (James Franco) seems to be living a kind of absurdly charmed hipster dream life: His books are selling, and his agent (Cynthia Nixon) is selling more proposals for him. (“I got twice what you asked for!” she chirps.) He rides motorcycles and lives in a large apartment with a sign that reads, “If you leave me, I’m coming with you” on the door. He has scraggly facial hair, the requisite tattoos, and a passel of book reviews that say he has spun the pain of his childhood into gold on the page.

“We’re all victims of our father,” he writes on his laptop at one point, standing up next to his fancy coffee grinder. Franco’s Elliott is the sort of guy who writes standing up because he probably read that Hemingway did that.

His daddy issues come home to roost at a reading where his father Neil (Ed Harris) confronts him about the outright lies in his much-lauded memoir; in Elliott’s book he killed his father off, but Neil is very much alive and very loudly wants to prove it. This scene at the reading is so crudely vivid that it feels like it must be a fantasy — like some of the memories of Elliott’s childhood that first-time writer-director Pamela Romanowsky, adapting Stephen Elliott’s memoir, cuts in at various moments in a fragmented way — but the ruckus Neil causes at the book reading actually does happen, and so Elliott must deal with the fallout.

Most of his contracts evaporate after the revelation that he made up some of his memoir, and a deal with Penguin to write a true-crime book about a man (Christian Slater) accused of murdering his wife isn’t working out the way he wants it to. Elliott wants this book to be his “In Cold Blood” or “The Executioner’s Song,” but something isn’t right about the subject for him, and he gets blocked. (Franco is currently starring in “True Story,” which puts him on the other side of the bars as the subject of a true-crime book.)

Elliott starts breaking up and snorting Adderall tablets, and he eases his tensions with masochistic sex sessions with hookers, one of whom puts out a cigarette on his chest. He starts seeing Lana (Amber Heard), a diffident brunette covering the murder case for The New York Times, but their relationship craters after he asks her to choke him as hard as she can until he passes out. Lana freaks when she can’t get him to wake up, and she freaks even more when he comes to and says, “I love you,” which makes her realize that this is guy is screwed-up in more than a garden-variety way.

Franco plays the beginning scenes of “The Adderall Diaries” in his amiably stoned, smiling mode, but he bestirs himself far more than usual in his scenes with Harris, two of which are blistering, all-out confrontations where he goes toe-to-toe and eye to eye with the veteran actor and doesn’t falter. At first, Elliott’s struggle does not seem like promising material for a movie, and some might be unsatisfied by the shifting, inchoate nature of the film’s forward trajectory, but at a certain point the narrative begins to coalesce around the idea of taking responsibility for your own life, and Romanowsky makes this seem like a refreshing or at least tough-minded theme.

A lifelong exaggerator, Elliott begins to wonder if any of his memories can be trusted, and he might be too far along into his lies and self-deceptions to ever get his memories straight, but “The Adderall Diaries” describes, in a convincing and even modestly touching way, his growing awareness of this condition. The flashbacks to his youth become more harrowing as the film goes on, but Romanowsky presents them at a distance and never lets them go on too long. She was wise to hire Harris to play Franco’s father here; his manly, tough, but very vulnerable presence grounds the whole movie in the reality of a man with many regrets who wants to try to make amends.

The style and tone of “The Adderall Diaries” is loose and free flowing, so that heavy subjects never feel heavy-handed in their treatment. This film moves along, holds the attention, makes its points, and then it flutters away, like a boxer’s feet dancing in the ring.