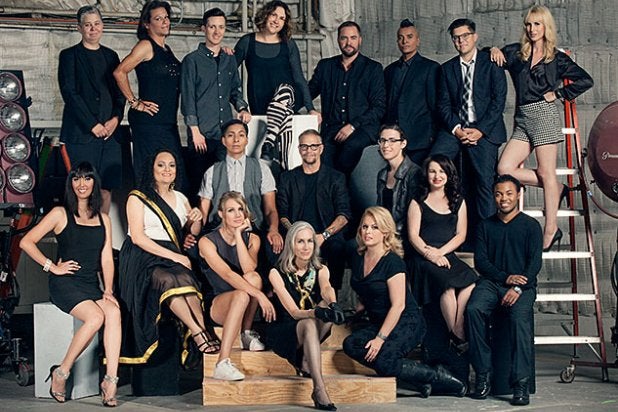 With the premiere of Amazon Studios’ transgender series “Transparent” looming, The Advocate’s editor-at-large Diane Anderson-Minshall dropped by the set for their October/November 2014 issue. There, they got the chance to meet and interact with the largest group of transgender cast and crew in Hollywood.

Jill Soloway and Jeffrey Tambor gained a lot of media and fan attention when their Amazon pilot for “Transparent” premiered February 6. The streaming giant quickly picked the show up to series filming a 10-episode first season, which will premiere in its entirety on Friday, Sept. 26.

The series follows Tambor as a father of adult children who finally comes out publicly as a transgender woman at 70-years old. As one would imagine, there is a wide range of reactions from within the family and in the surrounding community, and it’s evident that Soloway is determined to get this story right.

Known for challenging series like “Six Feet Under” and “United States of Tara,” Soloway initiated what was dubbed a “transfirmative” action program, hiring many transgender men and women to join the cast and crew of the show. She also distributed copies of Julia Serrano’s trans memoir “Whipping Girl.”

The Advocate commemorated the monumental achievement of “Transparent’s” impressive “transfirmative” action cast and crew by gathering them together, with Jill Soloway (top row center), for a group photo, seen above.

The magazine further delves into the complexities of exploring a transgender person coming out later in life by talking with several transgender members of the crew, as well as Tambor himself, who admitted that he saw himself as pretty for the first time in years. He also said that it surprised him how easily it was to find this female character within himself, as she tapped into parts of himself that had always been there.

The entire 10-episode first season of “Transparent” will be available for streaming on for Amazon Prime subscribers on Friday, Sept. 26.