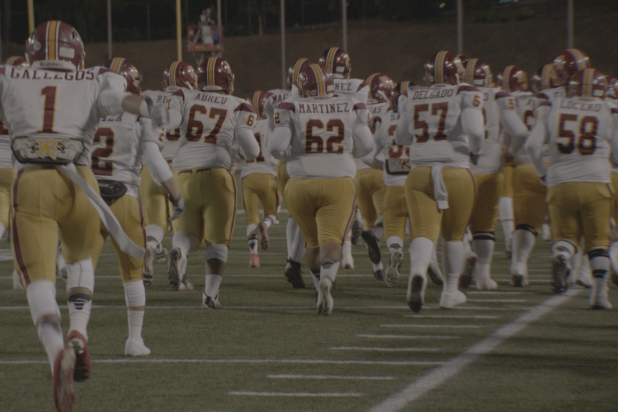 Roosevelt High School head football coach Javier Cid calls East Los Angeles (known locally as “East Los” or simply “East L.A.”) the “Ellis Island of the West,” as it was once home to a variety of immigrant groups — Russian, Jewish and Japanese, to name a few. However, in recent years, it’s become home to the United States’ largest Latino population, with over 96% of its residents identifying as Latino or Latin-American.

And despite the fact that over 70% of its Latino community are U.S. citizens, they are still not seen as American, a point driven home in the narration from conservative and far-right commentators during the opening sequence of writer-director-producer Billy McMillin’s feature film debut, “The All-Americans.”

McMillin offers an insight into two East L.A. High schools, Roosevelt and Garfield, and their respective football coaches and team players in the nine months leading up to the annual matchup in a decades-long rivalry called “The Classic.” These are the kids living in the era of Trump: Not only do they have the usual teenager issues to deal with — falling in love, making good grades, planning for life after high school — but there’s also a lingering anxiety of knowing that much of the country is just waiting for you to fail so they can define you as “just another Mexican screw-up,” according to Roosevelt senior Mario Ramirez. He dreams of attending an Ivy League college but lives in a three-bedroom apartment with 14 other people and is unaware of the financial struggle ahead.

Mario is one of four young men McMillin follows throughout the film. The other boys have struggles of their own: Sammy Hernandez, also from Roosevelt, struggles with relating to his roots as he doesn’t speak Spanish well; Joseph “Spike” Silva, from Garfield, has a one-year-old daughter whom he must support with no real parental connections of his own; and Stevie Williams, one of the only non-Latinx kids at school, a magnet student who buses into Garfield and is being geared up to replace the current quarterback. As the documentary follows these young men and their respective coaches, it shines a light on the obstacles they each face being men of color, particularly those that come from immigrant households, with the backdrop of the most American sport that unites them all: Football.

Cinematographer Ann Rosencrans captures parts of East L.A. that truly define the neighborhood, focusing on shots of the murals and the busy neighborhood streets that exemplify what working class looks like in Los Angeles. The cinematography sells the point that these kids face challenges that you don’t see in traditional American football stories like “Varsity Blues” or “Friday Night Lights.”

And yet, while the film shows a busy Latino community, there’s something in the editing choices McMillin makes that doesn’t sell the entire story. Yes, East L.A. is a community that struggles with poverty and homelessness and crime, but what the film lacks and forgets to capture is that, despite these struggles, and the kids’ additional burdens, there is much beauty and joy to be found.

I grew up not far from the East L.A. neighborhoods featured; my mom even went to Garfield High for a short amount of time. Every time I drive from my Valley apartment to pick up my Christmas tamales in East Los, or to visit my friends that live there, I feel life. I feel culture. I feel like I belong. I didn’t feel that watching this film, despite all my real-life connections to the schools and city.

Also Read: Eva Longoria: 'Latinas Are the Last to Find Their Voices Amplified'

At various points of the film, McMillin makes an effort to point out that these teams don’t necessarily have the best athletes. At one point there’s a voiceover of a coach saying, “What it takes to win is more important than the win itself” as the action shows the kids struggling during the game. While this may indicate the strength these boys and their families have, it offhandedly dismisses them, too.

I do understand that the message McMillin wants to make is how much harder these kids have to try to be looked at as Americans, even when they love and are devoted to a sport that is as American as apple pie. But by not adding moments of joy, those little wins here and there, and forgetting to show the beauty that this community holds, he does what so many others have already done — othering them, even in their own story.