In 1985, the movie version of “Clue” was released, and there was predictable teeth-gnashing among critics over the blasphemy of making a feature film based on a board game. But as “Clue” co-star Michael McKean noted years later, “There’s a very good movie called ‘The Set-Up,’ Robert Wise boxing picture, which is based on a poem that’s barely one page long about a boxing match. You could make a good movie, or a sh-tty one, based on anything.”

And if we’re supposed to forgive this brightly colored and loud affair because it’s aimed at children, then good luck to parents who have to explain lines like “Pluck my life,” to say nothing of a resolution in which rage-fueled violence and destruction solves all dilemmas.

(This film also has some sort of tie-in happening with the United Nations’ global sustainability efforts, a strange choice given that the story is about how visitors who are different than you are literally only interested in stealing your babies and eating them.)

None of the birds here can fly, but that doesn’t seem to be a problem, since they all live on an island that they think is alone in all the world, and they feel secure because the legendary Mighty Eagle is watching over all of them. Mighty Eagle may be about the only thing left that Red (voiced by Jason Sudeikis) believes in, but then, as an orphan, he never had parents to tell him that the big bird is probably a myth. (A jumbled series of flashbacks under the opening credits show Red hatching in a Lost and Found.) 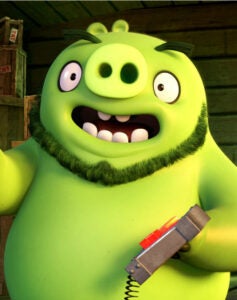 As one of the island’s few non-complacent birds, Red’s temper constantly gets him into trouble, with pompous Judge Peckinpah (Keegan-Michael Key) ultimately sending him off to an anger-management course taught by Matilda (Maya Rudolph). His classmates include Bomb (Danny McBride), who can literally explode, although he doesn’t harm himself; motor-mouthed, hyperkinetic Chuck (Josh Gad); and behemoth bird Terence, who only grunts. (The grunting makes this a Method actor’s dream gig, so it’s no surprise they cast Sean Penn.)

When some green pigs, led by Leonard (Bill Hader), come ashore in full we-are-your-friends mode, Red is the only one who’s suspicious, but since he’s already a pariah, no one pays any attention. Red travels with Chuck and Bomb to find Mighty Eagle (Peter Dinklage), but in true “Wizard of Oz” fashion, supposedly all-powerful recluses usually aren’t much help. It’s not until the pigs enact their horrible scheme that everyone looks to Red and his fury for guidance, leading to a third act that is, I imagine, where the movie starts reenactier played it; more of a Candy Crush Soda Saga guy myself.)

“The Angry Birds Movie” basically hits all the squares on the Lazily Conceived Family Cartoon bingo card, from a tsunami of pop culture references (the ones that touch upon “Fifty Shades of Grey” and “The Shining” are presumably meant to keep parents awake) to some of the most obvious pop song choices ever, up to and including Rick Astley’s “Never Gonna Give You Up.”

Writer Jon Vitti (a TV vet whose big-screen work runs the gamut from “The Simpsons Movie” to “Alvin and the Chipmunks: The Squeakquel”) never takes the leaps and bounds with the material that made “The Lego Movie” so beloved by so many; unlikely source material is no excuse to make a film that’s so patently by-the-numbers. Even though directors Clay Kaytis and Fergal Reilly (two first-timers with lengthy animation credits between them) make this world lush and colorful, the frantic pacing doesn’t help. Nor does the next-level scatology — in addition to the usual fart and butt jokes, we get a urination gag that includes visible urine. Again, have fun, mom and dad.

A screenwriter friend tells an anecdote about a colleague of his who went in for a studio pitch meeting, only to be told that the company was less interested in storytelling than in brand management. “The Angry Birds Movie,” and Sony’s announced/threatened upcoming “Emojis” cartoon, represent game-changing triumphs for marketers and accountants everywhere. As for moviegoers, we’ve just been encouraged to spend 90 minutes playing with our phones instead.

TheWrap’s film critic Alonso Duralde rates all the animation studio’s features, placing this week’s ”The Good Dinosaur“ in the top half