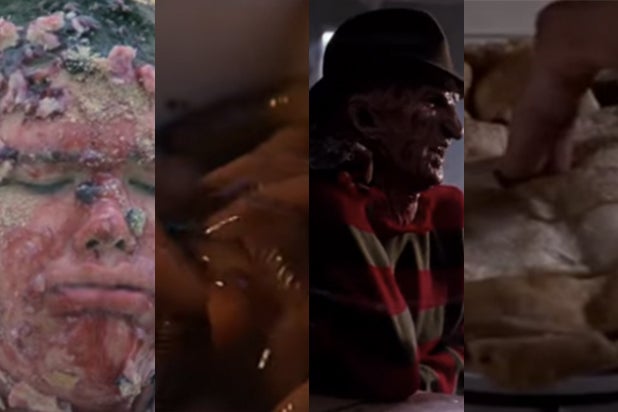 ‘Tis the season to stuff your face with turkey, mashed potatoes and pumpkin pie.

But if you’re looking to add some non-traditional fare to your Thanksgiving dinner menu, check out TheWrap‘s compilation of films that include crazy culinary concepts guaranteed to make your holiday guests run from the table.

From monkey brains to soul pizza, here are some of the most stomach-turning scenes in cinema.

Indiana Jones and the Temple of Doom
Snakes, bugs and eyeballs are all on the menu when Indiana Jones lands in India, and Willie Scott (Kate Capshaw) quickly loses her cool once the chilled monkey brains are dished out.

The Lost Boys
It’s hard to be the new kid in town, and in Santa Carla you have to prove you have the stomach to hang with the cool kids — who happen to be vampires — over take-out dinner. “Tell me Michael, how could a billion Chinese people be wrong?” Kiefer Sutherland asks Jason Patric. Warning: It’s not Chinese food.

Scary Movie 2
Everyone loves a meal cooked from scratch, but this 2001 spoof film gives the phrase “made by hand” a gross new meaning.

American Pie
So what does third base feel like? Warm apple pie. America’s favorite dessert gets worked over by Jason Biggs in this teen comedy romp.

Nightmare on Elm Street 4
What could be more horrifying than coming face-to-face with serial killer Freddy Krueger? If your face was his lunch. In this scene, Freddy haunts his victim — and viewers — by dining on a little soul pizza.

Stand By Me
The film may be about childhood friendship, but who can forget the tale of the “complete and total barf-a-rama” told around the campfire? This scene is not to be watched after a heavy Thanksgiving meal.

Soylent Green
In the dystopian sci-fi classic, Charlton Heston is an NYPD detective who investigates the murder of a CEO with ties to the overpopulated world’s main food supply. Sorry to spoil the 1973 futuristic thriller, but you should know by now that Soylent Green is made from people.