Syfy’s “The Ark” has cast Christina Wolfe, who plays Julia Butterworth on The CW’s “Batwoman,” as recurring character Cat Brandice, the network exclusively revealed to TheWrap on Wednesday.

The series from “Independence Day” producer and writer Dean Devlin, is set 100 years in the future when planetary colonization missions begin to ensure the survival of the human race. After a catastrophic event aboard the first ship to launch, Ark One, the remaining crew must do what they can to survive until they reach their target planet, which is still a year’s travel away.

Wolfe, whose character is Ark One’s psychologist, was also a series regular in two seasons of “The Royals” on E!. She is represented by The Artists Partnership and Link Entertainment. 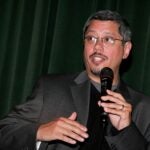 Miles Barrow, whose credits include Amazon Studio’s “Riches,” “The Peripheral” and “The Power,” as well as BBC’s “Marriage,” has been cast as Baylor Trent, an ensign trying to figure out his identity and how he fits into Ark One. Barrow is represented by Thrive Talent in the U.K. and Greene Talent in the U.S.

Two alums from “The Outpost,” a Syfy-produced series that aired on The CW, will also recur: Actor Pavle Jerinić will play Lt. Felix Strickland, Ark One’s aloof but honorable head of security. Tiana Upcheva, who played Warlita on “The Outpost,” has been cast as Eva Markovic, who is in charge of the maintenance, engineering and life support teams and who experiences a secret loss during the Ark tragedy. She also starred in “Emergency Center,” the Serbian remake of “ER,” and the Serbian series “Game of Destiny.” They are both represented by Slavic Artists Management.