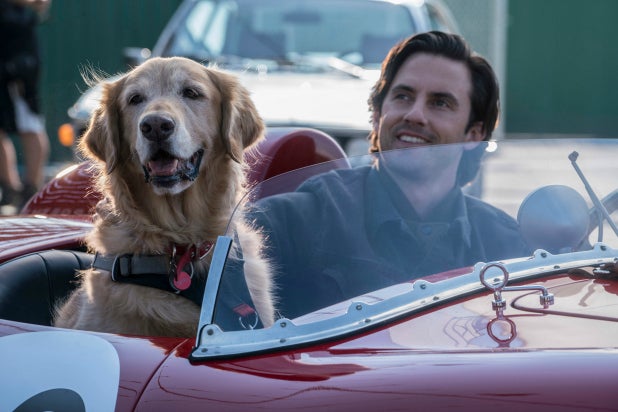 Based on the tepid reception to “A Dog’s Journey” (the sequel to 2017 hit “A Dog’s Purpose”) earlier this summer, the trend of interior-voice canine flicks isn’t necessarily a case of unconditional love with moviegoers. But hopes are now being pinned on “The Art of Racing in the Rain,” the latest adaptation of a “first-person” animal story (this one a 2011 bestseller by Garth Stein), that dog-loving audiences — receptive to the notion that their four-legged companions contain hidden depths of English-language acquisition and philosophical awareness – will be ready once more to fill theaters when presented with family-friendly pet-centric fare.

Don’t let that “Art” in the title fool you, though: This sentimental slog about the relationship between a friendly golden retriever and the growing family of a race car driver is, under director Simon Curtis’ no-nonsense stewardship, about as box-checked and rubber-stamped as mainstream entertainment gets.

For that matter, don’t let the “Racing” in the title give you the wrong impression, either. Despite a concerted effort in the running narration of canine Enzo (voiced by Kevin Costner) to connect the intricacies of auto racing technique to one’s handling the vicissitudes of life, the driving sequences are neither atmospheric nor exciting. The movie itself, however, is certainly a seat-belted excursion on a fixed course of bland cutes, sorrows and triumphs.

Watch Video: Milo Ventimiglia and His Dog Go for a Drive in 'The Art of Racing in the Rain' Trailer

The sport is mostly watched on TV, anyway, since everything is from Enzo’s perspective, which means away from the track and focused on the personal trajectory of Denny Swift (Milo Ventimiglia), a decent fellow introduced as an emerging Formula 1 talent whose specialty, so explained to us by his racing instructor (Gary Cole), is turning a downpour into a driving advantage. Enzo, whom Denny adopts as an adorable puppy, takes a sponge-like approach to life-learning — observe Denny, pick up the rest from television — ultimately hewing to a piece of Mongolian lore overheard in a documentary, that a well-prepared dog will be reincarnated in the next life as a man.

When Denny meets Eve (Amanda Seyfried) and romance blooms, Enzo is initially jealous and concerned about redirection of affections, but soon warms to Eve’s innate kindness and perma-beam smile. But when it becomes a marriage that produces a baby — with Ryan Kiera Armstrong playing daughter Zoe as a young child — Eve’s hovering, wealthy parents (Kathy Baker oozing politeness alongside a churlish Martin Donovan) won’t let go of their snobby suspicion that Denny’s danger-filled, travel-necessary profession is an unsuitable one for a responsible father. (Later, Enzo protests against mean grandpa with a deliberately-timed excretion, a graphic reminder we’ve come a long way from what passed for amusing dog tricks in the days of Lassie and Benji.)

The key emotional pivot in the years-long narrative comes with a character’s professed headache, a prominent Bayer bottle, and Enzo’s nose for biological decay in humans. It sends “The Art of Racing in the Rain” down the road of so many weepie wannabes, a path made no more illuminative or poignant for having it talked out to us by a nice dog. As a reading experience, Stein’s canine-monologue format, and the incoherent but earnest mix of comic innocence and sage wisdom, invariably made for a powerful fantasy perspective on the highs and lows of navigating everyday existence, even if it always seems as if one gender does the beatific suffering in these types of stories.

But as a movie, even with a growl-weighted Costner’s admirably even-keel delivery, Mark Bomback’s adaptation, as rendered by Curtis (“My Week With Marilyn”) with the help of unobtrusive cinematography from Ross Emery (“Woman in Gold”), is little more than an audiobook with information-appropriate window dressing. (At least the merging of Enzo’s gab stream with the slide-show visuals is smoothly handled by editor Adam Recht.)

Ventimiglia and Seyfried make the most of under-imagined characters whose niceties, flaws, ups and downs exist only to trigger the pontificating Enzo, rather than to animate the surroundings in any compelling way apart from the plot’s freight train of forced feeling. The physical canine work is solid, but hardly the kind of integrated animal choreography that suggests a galvanizing dog performance; the incessant voiceover undercuts any attempt on our part to watch Enzo faithfully and to do what we all do in real life with beloved, language-deficient creatures — read their essence, and project accordingly. Like most movies, the narration just gets in the way.

It’s the central irony of “The Art of Racing in the Rain” that its well-intentioned sop to dog lovers’ belief in the complexity of a canine soul is ultimately what keeps it from truly being heartfelt or emotionally affecting about the healing power of our furry best friends. But even accepting the gimmick for what it is, there’s little here to suggest a movie that wanted to be anything but a smile-and-sniffle time-killer.