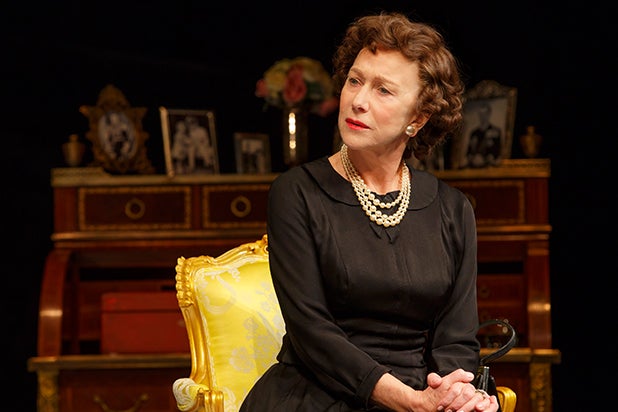 “Do you think they’ll bring back Princess Di for the second act?”
That’s a question that a bored, beleaguered theatergoer asked during the intermission of “The Audience,” Peter Morgan‘s new play about Queen Elizabeth II, which opened Sunday at the Gerald Schoenfeld Theatre in New York.

Spoiler alert: No, Princess Diana does not make a much-needed return in the second act of “The Audience.”

The princess, in fact, is not even a character in “The Audience.” She is merely referred to by a prime minister when he passes Diana’s opinion of the monarchy on to the queen (Helen Mirren), and recommends that the royal family pay taxes, give up their beloved yacht, and allow the public to tour Buckingham Palace.

Queen Elizabeth reacts to these suggestions as if she were an isolated, pampered, spoiled brat in other words, someone who expects people to call her “Your Royal Highness.” It’s why Mirren and Morgan have to spend all of act two trying to reestablish some audience empathy with a figurehead who barely registers as a human being despite Mirren’s valiant efforts to distract us with several quick-costume changes.

If you’ve seen Mirren in “The Queen,” also written by Morgan, there’s no reason to see “The Audience.” Princess Diana provides the dramatic conflict that drives the movie, and her presence is sorely missed in the play, where’s there’s absolutely no dramatic conflict.

The plot, what little there is, hinges on a series of prime ministers who hold weekly meetings with the queen to inform her of what’s going on in the British government over her multi-decade reign. Whether the queen agrees with them or not on the Suez Canal crisis or the Iraq War, she must publicly support their decisions, and life and politics go on as if she never existed. “The Audience” makes the best case ever for ridding the United Kingdom of the royal family.

But why would there be any need to hector, lecture, or plead with this woman? During these audiences, Mirren doesn’t check her wristwatch like George H. W. Bush at a presidential debate, but she shows exasperation when any prime minister lingers beyond the 20-minute time limit of his visits, and at one point she falls asleep in a not very comfortable chair. Broadway theatergoers will sympathize, especially with having to sit in bad seats.

Morgan gins up our empathy for the queen in act two by giving her an easy rival in Ivey’s Margaret Thatcher, who, if she could grow a mustache, would be twirling it.

The two women get into a heated argument about sanctions against the apartheid government of South Africa, and being an unfeeling union-bashing racist, Thatcher opposes such action. The liberal queen, of course, favors sanctions, but since her opinion doesn’t count, she must publicly support Thatcher’s decision. Apartheid remains in place, for the moment, and the queen gets to keep her yacht, thank you very much.