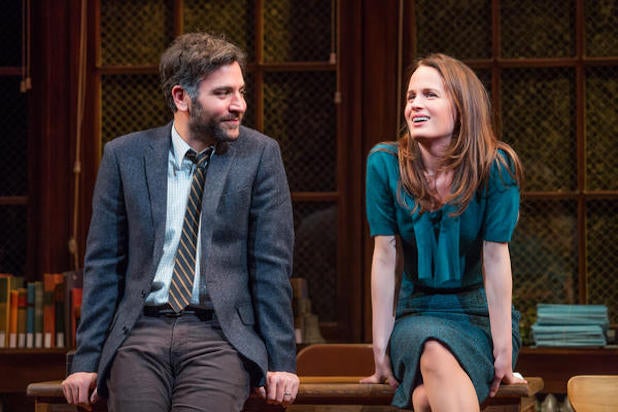 Richard Greenberg can’t seem to make up his mind what characters, plotline, or ideas he wants us to follow in his new play, “The Babylon Line,” which opened Monday at Lincoln Center’s Mitzi E. Newhouse Theater. Fortunately, his many detours and transgressions work only to keep us riveted for this two-and-a-half hour comedy.

It’s his always-diverting language immediately seduces, because the set-up isn’t exactly promising. As the Vietnam War rages in 1967, a 37-year-old Manhattanite (Josh Radnor) is teaching his first adult-ed class in writing, and he’s teaching it in Levittown, Long Island, hence the title “The Babylon Line.” Greenberg teaches us a few things about adult-ed classes: The people who enroll are bored and can’t get into the class they really wanted to take, like cooking or flower arrangement; and the people who teach are failed writers who can’t get a real teaching job.

Greenberg and director Terry Kinney know precisely how to deliver and play, respectively, this material. Aaron Port the teacher is the one sane, reasonable character, and he is played with great comforting charm by the immensely appealing Radnor. One by one, as his students enter the classroom, the four Jews (names range from Cantor to the unpronounceable Hassenpflug) are played to stereotypical perfection by Maddie Corman, Randy Graff, Julie Halston and Frank Wood. For variety, the one Gentile male (Michael Oberholtzer) is hard to make out since he doesn’t talk much, except to say he’s working on a magnum opus, and is probably borderline schizophrenic.

Then there’s the late arrival of Joan Dellamond. What a name! Obviously, she’s the enigma, and is played as such by Elizabeth Reaser in a performance that teeters brilliantly between awkward and inspired for almost the entire course of “The Babylon Line.”

Greenberg also teaches us much about the strange place that is Levittown, the planned community built after World War II by developer William Levitt, the father of modern suburbia.

What the students initially write and read in class is as cookie-cutter boring, and therefore hilarious in a sad way, as is the town they live in. Greenberg and Kinney jazz up those fortunately brief readings by having the student characters often act out what they’ve written. Midge Braverman’s short story about the pleasure of mowing her lawn is a special delight as performed by Halston. So are the students’ critiques of each other’s writing, and it is here that Graff’s Frieda Cohen, the bully of Levittown, begins to grab our attention away from Aaron and Joan, as she emerges as the thorny third wheel in their budding romance.

A few weeks into their class, the students’ short stories are anything but tedious, and obviously neither is life in Levittown once you look beyond all those identical front doors. Equally disturbing is the way in which Radnor, beneath Aaron’s detached professionalism as an instructor, battles with contempt. His disappointment over teaching a bunch of Long Islanders is surpassed only by his own self-hatred.

One of the true theatrical pleasures of “The Babylon Line” is its dark playfulness. Late in the play, just when Greenberg has begun to tease us with a denouement, Aaron launches into a long, seemingly endless exploration of all the characters’ future lives. It’s wonderfully exuberant in its circuitous length, but like the rest of “The Babylon Line” has much to say about the nature of creativity and how imagination shapes reality, and vice versa.