The big takeways from the first trailer for “The Batman” were pretty obvious — the newest version of the Caped Crusader and the brand new Zodiac Killer-inspired reimagining of The Riddler. But as some very eagle-eyed fans pointed out in the days since the trailer launched, an innocuous detail might be hinting at the movie debut of another major Bat-antagonist: The Court of Owls.

The moment comes 41 seconds in, when Commissioner Gordon (Jeffrey Wright) hands Batman (Robert Pattison) a riddle left by the Riddler (Paul Dano) at a crime scene — written inside a Halloween greeting card. Addressed directly to Batman, the card is adorned with a very prominent cartoon Owl and a comic strip-style “Whoo?” along with the words “from your secret friend” across the front.

Of course that isn’t necessarily a reference to villainous owls. In fact one of our initial thoughts seeing the card was that it was might be intended to invoke “Batman: The Long Halloween,” the 1996-97 miniseries generally (though not always) considered the canonical follow-up to Frank Miller’s “Batman: Year One.” We’ll save that discussion for another time but to boil it down, that story examines how some of Batman’s greatest enemies began to crawl out into the open during his second year behind the cowl.

But that’s not why we’re here. Read on for more about the possible hint, and just what the Court of Owls actually is.

1) So What the Hell Is the Court of Owls? 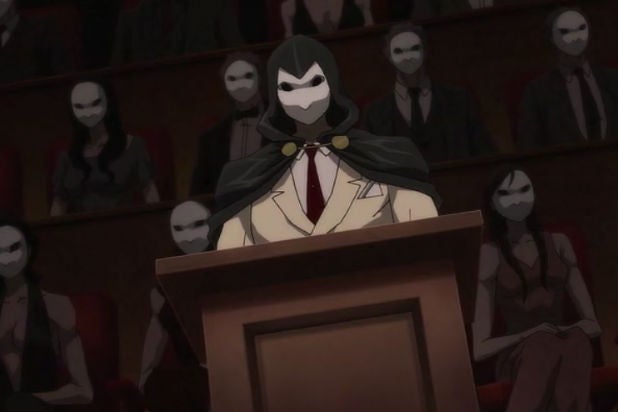 Created by Writer Scott Snyder and artist Greg Capullo, if you haven’t heard of the Court of Owls that’s OK. They’re one of the newer arch Bat-villains, debuting in 2011 as part of the “New 52” continuity reboot.

As Bruce Wayne discovers, The Court of Owls is an ancient conspiracy going back to the very founding of Gotham City itself. A secret society whose members come from Gotham’s oldest and wealthiest families, since at least the late 1600s the group has used clandestine violence and incredible wealth to manipulate city politics and maintain the power of wealthy elites. Bruce even suspected them of engineering his parents’ murders at one point, but apparently there was no evidence for it.

The Court is served by assassins known as Talons, individuals kidnapped as children and raised to be fanatically loyal to the Court. Usually only one Talon was operative at a time, and when they became too old they would be murdered by their replacement. In their debut story, the Court activates all Talons at once (don’t ask, it involves magic) to take Gotham from Batman once and for all (it didn’t take), and since then a few individual Talons have proved to be difficult challenges for Batman.

Though Batman has tangled with them many times, they never really went away and in current DC continuity they’re now an international organization rebranded as “the Parliament of Owls.”

If they show up in ‘The Batman” it won’t be their first appearance outside of the comics. Versions of them appeared in the Fox TV series “Gotham” and as the main villains in the 2015 animated movie “Batman vs. Robin.”

Now let’s get back to those possible hints.

So first, the main reason we didn’t really register the front of the card is that it comes in an almost literally a blink-and-you’ll-miss it moment. It’s hard to even tell it’s an owl before it opens to the actual riddle inside the card, (Which, by the way, fans have already solved.) Viewers with much better video capturing however managed to get a crystal clear screengrab and we admit that changes everything. Here’s what it looks like: 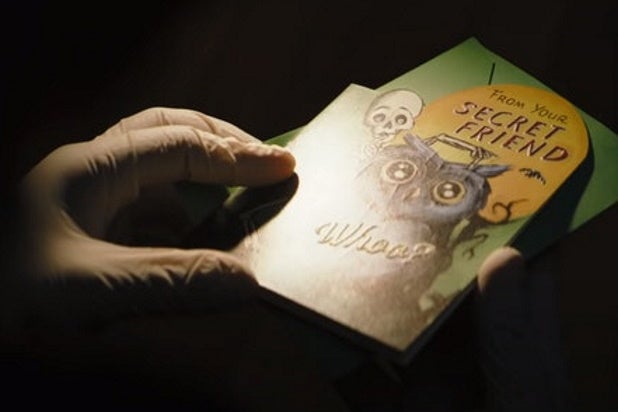 This being a movie all about how Batman establishes his reputation as “The World’s Greatest Detective,” we have a hard time believing director Matt Reeves would go through all the trouble of creating such a distinctive prop without it having some kind of meaning.

This might be more of a stretch, but a lot of fans have pointed out that in set photos released earlier this year, the gauntlets on Bruce Wayne’s “The Batman” suit look very similar to gauntlets worn by the Talon named William Cobb. See for yourself: 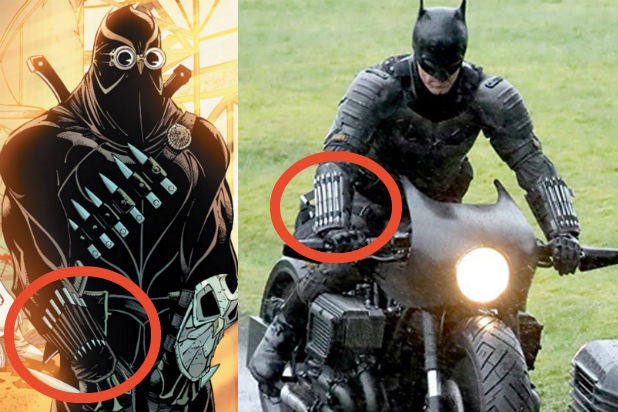 This could obviously just be a coincidence, we just mention it now because, well, they look pretty similar.

“You see [Batman’s] not having any of the effect that he that wants to have yet,” said Reeves. “And that is when the murders start to happen. The murders begin to describe the sort of history of Gotham in a way that only reinforces what he knows about Gotham but it opens up a whole new world of corruption that went much farther. But as that story starts to come out, without being an origin tale for him, touches on his origins.”

Uh, that sure does sound a lot like some kind of ancient conspiracy to us. And what’s that about how the film “touches on his origins?” Remember how Bruce suspected they might have had his folks killed?

That’s all we got for now. Check back with us after the next trailer.