Few actors are as skilled as Richard Gere at making conspicuous privilege psychologically compelling, and in the indie drama “The Benefactor,” he once again shows that facility, playing a self-destructive philanthropist who inserts himself into a young couple’s lives.

While writer-director Andrew Renzi’s feature narrative debut is problematic whenever Gere isn’t onscreen (and even sometimes when he is), the veteran star exudes a damaged magnetism reminiscent of the character studies that thrilled discerning moviegoers in the ’70s.

As the movie opens, a hyper, excited Francis “Franny” Watts (Gere) is at the country estate of his dear married friends Bobby (Dylan Baker) and Mia (Cheryl Hines), hashing out the details of a new children’s hospital he’s building. It’s all a little too cheery, Renzi all but telegraphing impending tragedy with a follow-up shot from inside a car as the three pals laugh and laugh, Franny impishly distracting Bobby, until a semi plows into them.

See Video: Richard Gere Gets Too Close to Dakota Fanning, Theo James in Trailer for 'The Benefactor'

Five years later, a bearded, shaggy-haired Franny — the accident’s only survivor — putters around a swanky hotel suite with a cane, looking like a shipwrecked wizard, knocking back morphine concoctions from Mason jars and shielding himself from public view. When his friends’ grown daughter Olivia (Dakota Fanning) calls to reconnect and let him know she’s pregnant and married to young physician Luke (Theo James), Franny senses a chance to be both part of a family again and a prominent public figure.

For a while, this outsize personality and his insistent patronage bring an exciting burst of eccentricity to the couple’s world. But since gifts and showered affection are this otherwise misguided soul’s only currency, Franny’s smothering molding of Luke into a rising medical star quickly turns sour, and the depths of Franny’s opiate addiction start to take their toll. 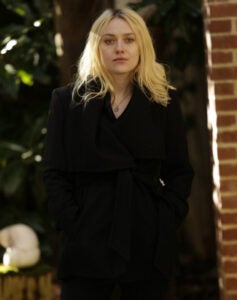 At the heart of “The Benefactor” is a picture of moneyed arrogance that should have some resonance in this age of activist one-percenters using their power and purse to remake the world literally in their own image — and for their own ends. That Franny is a loudmouth gadfly with no recognizable skill (or even discernible sexuality) is one interesting piece of Renzi’s character puzzle. Another is that his desire to do good (he visits his hospital’s sick young patients regularly) feels simultaneously genuine and self-serving.

It’s less believable that we don’t get a sense of Franny’s politics, although making him an addict — which dominates the movie’s final third, as he harasses doctors and takes desperate, self-harming measures to secure drugs — allows the movie to avoid the political arena. At the same time, it feels like a convenient way to elicit dramatic sympathy for someone whose very air is different from the majority of the world’s.

Renzi’s approach to his own material is almost painterly, rather than tough and messy, and it lends a stiffness to the movie that makes whipping up an emotional head of steam difficult. Gere, however, plays Franny like a fiddle, and it’s a treat to watch. Long an underrated leading man, having built a career on the nuances of scary entitlement and barely-contained perversity rather than demanding the audience’s love, Gere is in his element showcasing Franny’s maddening, devil-may-care charm and his palpable undercurrent of self-pity.

Like Dustin Hoffman, age has loosened Gere up so that his smiles are more readily vulnerable, and his physicality more appealingly goofy. Though you never exactly like Franny, he’s appropriately a force of nature, and Gere tackles his ill-conceived aimlessness like one of those lengthy New Yorker profiles where the details fascinate even if the sum total of the subject is still mysterious and weird.

Renzi is taken by Gere, too, to the extent that James and Fanning barely register beyond reacting to Franny’s possessiveness with mounting disdain (James) or blank stares (Fanning, who really should have been given more to do). James does get a big third-act tell-off moment, when he calls Franny a “junkie with guilt” to his face, but by this point the addiction storyline has taken over to an extent that its well-worn tropes — humiliation, aggression, redemption, all ably handled by Gere — dissipate the more psychologically delicate atmosphere of the earlier scenes.

All of this leaves “The Benefactor” feeling like a movie dominated by its hard-working star, rather than an engaging story that feeds off his considerable energy.