Nostalgia reigns supreme this holiday season with the Peacock limited series continuation of director/writer Malcolm D. Lee’s successful “The Best Man” film franchise. In a rarity for most networks — streaming, broadcast, or otherwise — that Lee, whose more recent hits include Tiffany Haddish’s breakout “Girls Trip,” got all his original stars from both the 1999 film “The Best Man” and its 2013 sequel “The Best Man Holiday” to revive their characters once again for eight episodes.

Considering that those stars aren’t exactly waiting by the phone, that is quite a feat, especially when other less ambitious efforts (“Friends: The Reunion” anyone?) haven’t quite gone as smoothly. With a cast that includes Morris Chestnut (“The Resident,” “Our Kind of People”), Taye Diggs (“All American”), Regina Hall (2022 Oscars co-host, “Girls Trip”,) Terence Howard (“Empire,” “Iron Man,” “Hustle and Flow”), Sanaa Lathan (“On the Come Up” as actress/director, “Succession,” and “The Affair), Nia Long (“NCIS: Los Angeles”), and Harold Perrineau (“From,” “Claws”), it’s more than impressive. The fact that they are all here — including Lee himself and Melissa De Sousa, who, judging by her selective resume, seems more fickle about the industry overall than her co-stars – -speaks to the deep love and respect they have for each other. Qualities we so wished were universally true of Hollywood and real life.

This limited series piggybacks on the original 1999 film which revolved around up-and-coming author Harper Stewart (Diggs’ character) and his explosive novel “Unfinished Business” based loosely around his friends — Long’s career-driven Jordan Armstrong, Chestnut’s star football player Lance Sullivan, Howard’s cynical Quentin Spivey, Perrineau’s pushover Julian “Murch” Murchison, his then insufferable girlfriend De Sousa’s Shelby, and Monica Calhoun’s Mia — that contained an explosive secret that could have stopped the wedding of college sweethearts Lance and Mia, for whom they were all gathered. That occasion also brought Harper’s girlfriend Robyn (Lathan) and Candy (Hall) who was working as a stripper to pay for college into the fold. 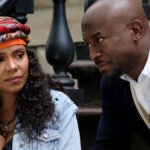 Now that the book could be headed to the big screen, Harper feels he needs the gang’s blessing to proceed. And what better time to get it than at Quentin’s unexpected nuptials on a Caribbean Island? That’s where the new drama starts, but it’s not where it ends.

Still grieving Mia’s crushing death in “The Best Man Holiday,” Lance has become a sex addict who is literally letting it all hang out but may strangely find love in the process. Still, his grief has made it hard for him to be there fully for his kids. But, thankfully, the career-driven Jordan, who is an exec at MSNBC (why not get a plug in for some cross-promotion?), has picked up some of the slack. Murch and his wife Candace, who have two kids, also run their own school but are finding themselves, personally in Murch’s case and professionally/personally in Candace’s. Harper and Robyn are now married with a daughter but the chef and the author aren’t on the same page. So much so that they can’t even agree where to live together.

Plus, there is always that unstated nagging feeling that Harper truly wants Jordan instead. Shelby, who is, fittingly, a reality star, is so rattled by Quentin’s impending nuptials to the self-proclaimed icon and brand maven Xiomara Imani, played by Nicole Ari Parker (“And Just Like That…”), that she goes on a quest to get her man.

Does the limited series take on too much? Absolutely. Are there stories viewers will wish they would have pursued instead of what they chose? Of course. Will people not watch, especially Black, professional, and aspirational viewers or simply fans of the franchise? Not even a consideration.

Foibles and all, over 20 years later, “The Best Man: The Final Chapters” is running on the same heart and soul that made it a hit in the first place. Before “Black Excellence” or “Black Love,” for that matter, became slogans to rally around, “The Best Man” represented that for an audience that, at the time of the first one, had been rendered invisible in the Hollywood myopia of “hood” films on the big screen and endless comedies on the small. Dramedy for Black people wasn’t even a real Hollywood thing until Lee made it so. And, for the first-time, white audiences also saw Black people having complicated friend groups packed with secrets, wisha-woulda-coulda hook-ups, career challenges, and more on the Hollywood screen just like them.

To see them fabulously older, richer, and even more complex over two decades years later is a great legacy to celebrate. It’s a binge that’s sure to be a welcomed gift this holiday season and beyond.

All eight episodes of “The Best Man: The Final Chapters” premiere on Peacock on Dec. 22. 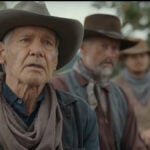