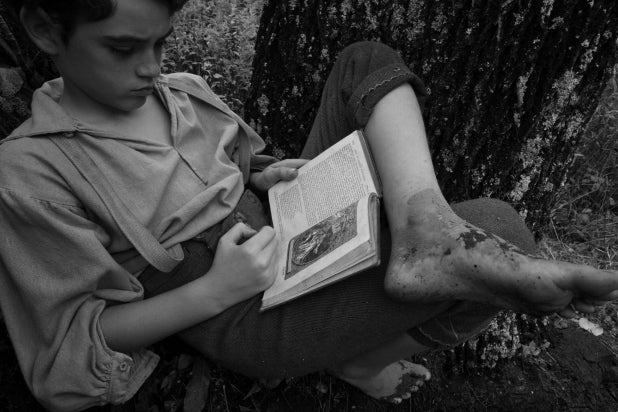 Directed in somber monochrome with a 93-minute running time made up of still, slow takes set in the hard-edged pastoral beauty of the American frontier just after the War of 1812, even the most casual film-follower will note a strong Terrence Malick influence on “The Better Angels” even before they see his name listed among the producers behind the film.

Director and writer A. J. Edwards, in his feature debut, has in fact worked with Mr. Malick for well near a decade, most notably as an editor, and the apple has not, as the saying goes, fallen far from the tree. At the same time, Mr. Edwards has given his film a strong narrative spine — depicting years in the life of young Abraham Lincoln as his family suffers and strives to succeed in Indiana — with such committed actors bringing life to the tale that the audience can’t help but be engaged even as the staid, stark visuals keep viewers at arm’s length.

Starring a host of distinguished actors, “The Better Angels” portrays young Abe (Braydon Denney) as he works alongside his stern and distant father Tom (Jason Clarke, “Zero Dark Thirty”) and loving mother Nancy (Brit Marling, “The East”). Building a home in Indiana — as slightly-older cousin and narrator Dennis (Cameron Williams) notes, Kentucky was getting too snobby — the Lincoln family endures tragedy after tragedy, on the edge of starvation and even losing Nancy to illness. The next Mrs. Lincoln, Sarah (Diane Kruger), joins the family in no small part as a way to survive, even as she grows to love Abe, and he her.

If you had to sum up the difference between “The Better Angels” and the more conventional bio-pics that have depicted the same life — “Abe Lincoln in Illinois” (1940) for example, or John Ford’s “Young Mr. Lincoln” (1939) — it would be best summed up that those films reverse-engineer a character from the icon who wound up on the monuments of the nation he saved; “The Better Angels” shows you the boy who would become the man who would become the icon, as defined by a tough and rugged life that served as a crucible of character.

Even with its stunning cinematography (by Matthew J. Lloyd, Robot & Frank) and its measured, careful pace, a lot of your ability to enjoy “The Better Angels” and its hand-shaped look and feel will be based on your personal tastes. Those who appreciate Mr. Edwards’ appropriation of Mr. Malick’s look and approach will find “The Better Angels” lives up to its aspirations; those who have no patience for lengthy shots of wind on crops or water in sunlight will find that “The Better Angels” crashes on the sharp-rocked shore of its pretensions.

Still, Mr. Edwards is to be commended not only for his capacities with his actors, but also for leaving his actors in silence: there’s not a lot of dialogue here except for Cousin Dennis’ voice-over, and much of the film is defined, wordlessly, by visual indicators of the passage of time. A cabin goes from frame to home; seasons change; old wounds and hurt feelings are healed by time and care.

“The Better Angels” is imperfect, and it’ll be worth seeing if Mr. Edwards can step off his patron-producer Mr. Malick’s path and find his own, but it also points to the debut of an impressive talent who might have something to say for himself once he’s done repeating his idols.