The curious thing about “The Boss,” the second film that Melissa McCarthy has made with her husband Ben Falcone as writer-director (following “Tammy” in 2014), is how little it seems to be working to amuse. There are nearly no laughs in this picture, and in a movie that bills itself as a comedy, usually you can see the performers working for laughs of some kind at least part of the time.

In the prologue, we see McCarthy’s character Michelle Darnell sent back to an orphanage three separate times — in 1975, 1980, and 1985, all with appropriate music cues, of course — and Margo Martindale‘s nun Sister Aluminata keeps welcoming her back. This is all done so hastily and carelessly that we don’t even find out much about why Michelle is being sent back, and this is symptomatic of “The Boss” as a whole: it isn’t comedy, and it isn’t drama, much less comedy-drama.

See Video: Melissa McCarthy Swears Up a Storm in 'The Boss' Red-Band Trailer

We next see Michelle in her adult guise as a financial guru in an overblown stage act that makes her look like a pop star (complete with flashing lights and back-up dancers), preaching the lure of selfish capitalism in an anti-family Ayn Rand style. McCarthy has chosen to wear a red, spiky hairdo and a variety of turtlenecks, and these two choices are exactly as far as she goes with this character: Red hair, turtlenecks, and corporate overkill, none of which McCarthy makes either convincing or funny.

In “The Boss,” McCarthy (who co-wrote with Falcone and Steve Mallory) always seems like a nice, wacky lady with bright eyes who you might meet at a bar or family gathering, and never a ruthless titan of the business world. When Michelle is put in prison for insider trading and then emerges with nothing but a suitcase and the clothes on her back, Falcone decides to put Nina Simone singing “Nobody Knows You When You’re Down and Out” on the soundtrack, a jarring choice, because this movie is so far away from the power and depth of Simone’s singing voice that you can practically hear the diva growling and swearing from the grave at whoever licensed her vocals. 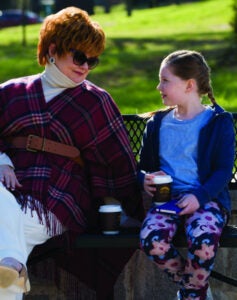 Michelle implausibly crashes on the couch with her former personal assistant Claire (Kristen Bell) and Claire’s daughter Rachel (the very likable Ella Anderson), and this sitcom set-up yields no laughs or even attempts at laughs aside from a bit where McCarthy is thrown at warp speed into a wall from a pull-out couch. With lots of time on her hands, Michelle takes Rachel to her Girl Scout troop meeting, and of course Michelle immediately takes over and ruffles some feathers. McCarthy’s talent is for slapstick and bold physical humor, and her attempts at verbal comedy sometimes lead her into some very lame places. (For instance, an extended riff McCarthy does about one of the girls in the troop probably being a lesbian.)

Michelle pulls herself out of her slump by applying her cutthroat high finance background to the selling of brownies baked by Claire and sold by the Girl Scouts, who are made to wear red caps and to give a hard sell to prospective customers. This is the strangest section of “The Boss,” as if “Troop Beverly Hills” had been mashed up with some Soviet propaganda movie. (Claire even says that Michelle’s design for the brownie box, with a girl in a red cap raising her fist, makes her think of Stalin.)

Any attempt at political commentary, however, is soon jettisoned in favor of more scenes that are neither here nor there, neither funny nor moving, as when Michelle goes to meet her former mentor Ida Marquette (Kathy Bates) for some financial backing. Bates brings gravitas to pretty much any sorry project she shows up for, and her brief scene with McCarthy is the only point in “The Boss” where anything seems to be happening, or where anything seems like it might happen, but the writing for Bates’s character is unfocused, just an afterthought, leading this sequence nowhere.

The wind-up of “The Boss” features McCarthy up against Peter Dinklage as Renault, a titan of business and former lover of Michelle’s. There is an extended sword fight between Michelle and Renault that might seem to play into McCarthy’s aptitude for physical humor, but this long bit doesn’t even raise a light chuckle. On the heels of “Tammy,” “The Boss” suggests that McCarthy really needs to regroup and find a project that she doesn’t have to carry all alone, and with a character that suits her sensibility better.