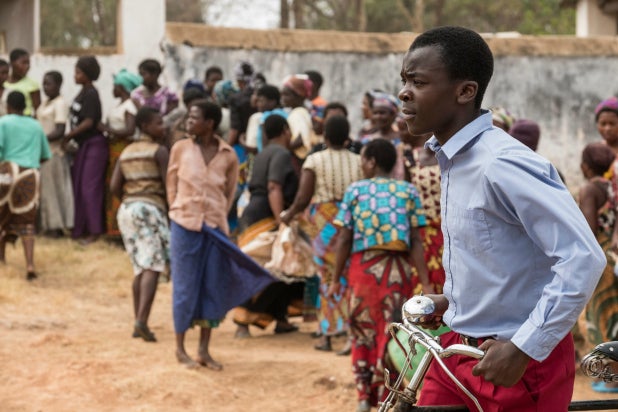 A lovely and thoughtful family film, “The Boy Who Harnessed the Wind” is a far cry from Marvel multiplex-ity. But once viewers (of all ages) adjust to its quiet and respectful approach, they ought to be drawn to a superhero of a different sort — and one who may feel more familiar than any costumed crusader.

What’s more, Ejiofor seems to have made things as challenging as possible: He directs a screenplay he wrote himself, and in an impressive, and effective, commitment to authenticity, he decided to film on location in Malawi with a mix of English and subtitled Chichewa (which he then had to learn).

Ejiofor also works hard in front of the camera on “The Boy Who Harnessed the Wind,” costarring as Malawian subsistence farmer Trywell Kamkwamba. Trywell is, like most of the people in his small village, constantly overwhelmed by a series of potentially ruinous setbacks. The current season is threatened equally by floods and drought, amoral landowners ready to sell out to tobacco interests, and a blithely uncaring government. Trywell and his wife Agnes (Aïssa Maïga, “Caché”) despair of ever sending their bright daughter Annie (Lily Banda) to college. But soon, it becomes clear they can’t even afford to keep their 13-year-old son, William (Maxwell Simba), in middle school.

Though William is kicked out for lack of tuition, he manages to sneak into the library with the help of a sympathetic teacher (Noma Dumezweni, the original stage Hermione in “Harry Potter and the Cursed Child”). As long as no one notices him — a tenuous caveat that could change at any time — William is free to study books on electricity and energy, with hopes of finding some sort of solution to the problems destroying his village.

Also Read: Beyonce Will Voice Nala in Live-Action Adaptation of 'The Lion King'

The pacing is slow at first, as we make our way into William’s life. These are the scenes more likely to appeal to adults than kids, who may find themselves bored by the political machinations of a far-away country. Rest assured that patience will be rewarded in full. Though the story may sound (and sometimes feel) like a familiarly inspirational tale, Ejiofor invests the narrative with heartfelt artistry.

Exhibiting a dexterity that suggests far more extensive directorial experience, Ejiofor proves himself a master of impact. His visual approach is expansive and evocative, thanks also to the fine work of cinematographer Dick Pope (an Oscar nominee for “Mr. Turner,” which shared a similar painterly appreciation for light and landscape). And Ejiofor’s script finds respect for each perspective, laying out complex issues in relatable fashion without pandering to younger viewers.

Ejiofor also creates believable bonds between each of his strong actors, giving even the supporting performers memorable moments. Simba, a charismatic Kenyan teenager making his professional debut, is a natural, as is Malawian musician Banda, also acting in film for the first time.

Maïga, a French movie star, is particularly soulful, making as much of quiet moments as she does the dramatic ones. Don’t be surprised to see much more of her in the future. And while he’s also welcome onscreen any time, let’s hope we’ll see much more of Ejiofor’s work behind the camera, too.